Mountain Rangers through to Benjies final

Vhutalu Mountain Rangers secured a place in the final of the Benjies Soccer Tournament final, following their 2-1 victory over Zwaloni United at the Khubvi Benjies grounds on Sunday.

The game was a thriller from the onset to the end, with the teams creating and wasting their scoring chances. United, who beat Tshatshingo Potholes 2-0 in their quarter-final match at the same venue the previous day, took the game to Rangers in the first 10 minutes.

They knocked on the Rangers’ door for the first time in the eighth minute. Their frontrunner, Kharendwe Mutshutshu, forced his way through the defence of Rangers and unleashed a half volley from inside the box. The ball hit the crossbar and bounced outside the field of play for a goal kick.

That was a wakeup call to the Rangers players. They regrouped from behind, creating some promising moves from the middle of the park. They took the lead in the 24th minute. The keeper of United, Zwanga Mundalamo, mishandled the ball after Khuliso Netshidzivhe’s attempt. Tshifhiwa Gandamipfa capitalized on the mistake and beat the keeper with a fine header.

United took control of the game soon afterwards. They retaliated in the 36th minute. Kharendwe Mutshutshu beat the keeper with a header, following a corner kick that was taken by Andani Tshikovha. Kharendwe Mutshutshu was reprimanded with a card after tackling Khodani Singo the rough way two minutes before the break.

The score was 1-1 when the referee blew the half-time whistle. Rangers introduced two new faces in the last half. They replaced Tshifhiwa Gandamipfa and Talifhani Munyamela with Mutendeni Nemurura and Mpho Singo respectively. Livhuwani Nengome of Rangers was also booked for retaliation after he was badly tackled by Andani Tshikovha. Tshilisanani Phalanndwa scored the Rangers’ winning goal in the dying minutes of the game. 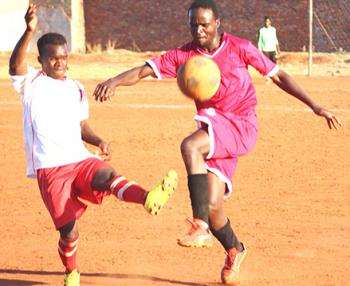 Ampfarisaho Thagwane of Rangers (right) and Steven Makhado of United are focused on the high ball.