With Mikhado FC and Tshakhuma RO Nandilani (TRON) blowing hot and cold, Venda Football Academy (VFA) remains the only hope for the residents of the Vhembe District. VFA enhanced their promotion chances by beating Polokwane United 2-0 in their ABC Motsepe League match at the Tshifudi Stadium on Saturday.

The Tshifudi-based side jumped from the fourth to the second position on the log, following Saturday’s hard-fought victory. VFA have deposited 18 points into their league account to date, three fewer than the pace setters, Magezi FC. Both VFA and Magesi have played 10 matches so far.

Jabu Malungani scored the opening goal for VFA 19 minutes into the game. Their second goal came via their lethal striker, Nkanyiso Gumede, who beat the keeper with a ground cutter later in the game.

The Dolphins FC are still in the race for the league title, despite the fact that they donated significant league points to their opponents last weekend. The Dolphins failed to absorb the pressure from TRON, who unexpectedly crushed them 0-2 at the Tshisahulu Mmbengeni Kone grounds. The Dolphins are tied on 18 points with VFA. VFA scored five goals more than The Dolphins. 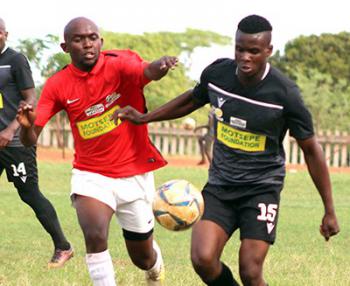 Henley Mbedzi of VFA (right) controls the ball while Daniel Kganyago of United is on his heels.