The struggle for points will continue among the teams campaigning under the banner of the Multichoice Diski Challenge League this weekend. What remains to be seen is whether Black Leopards will be resurrected from the “dead” and register their first victory for the season. They will play against Polokwane City at the Peter Mokaba Stadium in Polokwane tomorrow afternoon.

The young Leopards are fighting for survival. Lidoda duvha are still to win a league match. They managed to collect only five points from the 14 matches they played in the first round and are at the bottom of the log. The Thohoyandou outfit irritated the team’s fans when they failed to maintain their 2-0 lead to the end and played to a 2-2 draw with Chippa United at the Thohoyandou Stadium last Sunday.

Leopards will pin their hopes on Amukelani Chauke, Selby Rapatsa and Tiklas Thutlwa for goals, while Rodney Maphangule, Thato Letshedi and the team’s captain, Maanda Makhado, will be expected to keep their danger area clean.

Bidvest Wits will enjoy the home-ground advantage in their match against Stellenbosch FC at the Bidvest Stadium in Johannesburg. Highlands Park will travel all the way to Bloemfontein. Their match against Bloemfontein Celtic will be played at the Dr Molemela Stadium. Baroka FC will be visitors to Chippa United at the Nelson Mandela Bay Stadium in Port Elizabeth. Just like Black Leopards, Chippa United are also battling to find a winning combination.

The match between Maritzburg United and Orlando Pirates will be played at the Harry Gwala Stadium in Pietermaritzburg. The pace setters, Mamelodi Sundowns, will be away to Lamontville Golden Arrows at the Princess Magogo Stadium in Durban. The other fixtures are Supersport United vs Cape Town City and Amazulu vs Kaizer Chiefs. 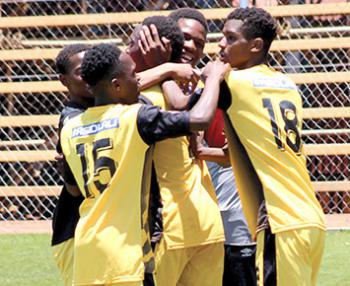 Black Leopards’ players celebrate the team’s second goal. This was when they played to a 2-2 draw with Chippa United at the Thohoyandou Stadium last Sunday.