The residents of Vhembe and surrounding areas will be able to attend a musangwe (traditional boxing) tournament at Tshifudi Dipeni this festive season.

It started last Saturday and will continue until the first week of January.

Mr Tshilidzi “Poison” Ndevana, president of musangwe, said that they had decided to stage a tournament at Tshifudi after realizing that people were thirsty for more action. "This is our indigenous traditional sport which we must preserve." He added that the fights “were started by our ancestors and they are approved by local traditional leaders”.

The fights are attended by men, and women can only sell items such as mageu and food at a distance. “This is part of our culture, and as Africans we will continue to pride ourselves on our heritage.”

According to Ndevana, musangwe has more to it than meets the eye. “This is a sport that teaches respect among men. Boys are prepared for their future roles here, and we are also ensuring that the sport and our culture do not fade away,” he said.

He said they wanted to see the sport grow, but they did not have the resources to promote it. “Most of our fighters have the potential to make it in boxing and we are encouraging them to follow boxing and not end up only as unpaid fighters. There is a lot of money in boxing. We are hopeful that we will soon produce a champion from this area,” he said.

Volunteers are randomly chosen from two teams to fight until one of them is either knocked out or surrenders. “I don’t fear anybody. I believe in fighting with an opponent or enemy until he conquers me, or I conquer him,” said one of the fighters, Tshinandala Tshikundamango. 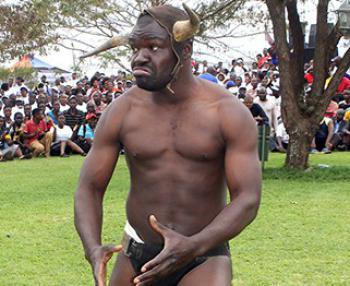 One of the boxers, No hurry, will be in action again, after taking a break for three years.