The mother of the late Bafana Bafana striker and former Orlando Pirates player Lesley “Slow Poison” Manyathela is upset with the state of the Musina stadium that was named after her son. She asked that the stadium be renamed, because it does not honour the memory of her son.

Manyathela died in a car accident 16 years ago. The stadium in Musina was named after him to honour his legacy. In the past few years, however, the stadium has become the target of vandals. The fence collapsed and the entrance gate was damaged. Just about all the windows of the dressing rooms are broken and the once grassy pitch is now only an open piece of gravel.

Ms Gladys Manyathela said that after the stadium was named after her son the government had promised to take care of it. The stadium was supposed to be a tool that would help in producing more soccer stars in the Musina area.

In the past, Musina had produced soccer stars such as Lesedi “TT” Kapinga and Khuliso Mudau, who played for Black Leopards. Ms Manyathela blamed the local municipality for neglecting the stadium. “I need this stadium to be renamed or called by another name, not my son’s name,” she said.

The spokesperson for the Musina Municipality, Mr Wilson Dzebu, said that the municipality had budgeted R1 million to renovate the stadium. He appealed to community members not to vandalise the property and to protect the stadium. 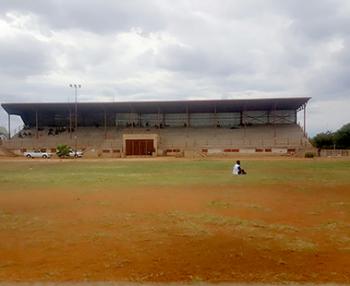