Tshakhuma Tsha Madzivhandila (TTM) continued to pave their way to the Absa Premiership Division by beating Mbombela United 1-0 in their GladAfrica Championship League match at the Thohoyandou Stadium on Sunday.

As if they had won a cup final, the team’s supporters could not stop celebrating after the referee blew the final whistle. The victory was worth celebrating when one considers the fact that the visitors from Nelspruit demonstrated from the onset that they were not on honeymoon in Thohoyandou, but that it was a business trip.

TTM, or Vhadau Vha Damani, moved a step up on the log standings with the victory. The Tshakhuma side are now lying in the fifth position with 29 points accumulated from 18 matches. They are five points behind the pace setters, Uthongathi FC.

TTM could have scored more than one goal, had they not taken too long to replace their striker, Naeem Amoojee. He was too casual, giving the visitors room to do as they pleased within their own half.

United’s defence started to demonstrate fear after TTM introduced Thembisani Nevhulamba and Mboniseni Mbandlwa for Naeem Amoojee and Tommy Mandlazi respectively later in the last half. The goal through which TTM grabbed the three significant points came via Thembisani Nevhulamba, 11 minutes before the referee, Mr Velapi Sicelo, blew the final whistle.

Asked to comment after the game, Mr Vladislav Heric, TTM’s head coach, admitted that the game had been difficult, although they had missed several clear scoring chances. He further indicated that he was comforted by the fact that they had finally managed to score the all-important goal later in the game. Royal Eagles are rooted at the bottom of the log. 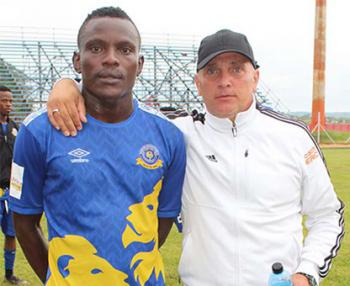