In their MMK Administrators Soccer League match at the Tshitungulwane grounds on Saturday, Muziafera Blue Eagles brutally crushed Flying Eagles 3-0 to stay on course for the league championship.

Flying Eagles demonstrated a spirit of commitment in the first 15 minutes of the game, but their stamina vanished with time. They created several promising moves from behind, with their strikers fumbling at the goal finish. Their centre half, Fhulufhelo Mulovhedzi, was the first player to cause an upset. He beat two defenders in a row and unleashed a half volley from the edge of the box but suffered the pain of watching the ball miss the target by inches.

That seemed to scare the Blue Eagles’ forwards. It took the home side 24 minutes to open their account. Their overlapping midfielder, Lufuno Munyai, forced his way through the defence of Flying Eagles and blasted in a rocket from inside the box.

In the 37th minute, Blue Eagles increased the lead. Their captain, Hulani Mphephu, received a neat pass from Zwidonaka Rudzani and beat the keeper with a ground cutter to bring the half-time score to 2-0.

Flying Eagles approached the last stanza with more self-confidence. They effected three changes to their starting 11. The move was not good enough to stop Blue Eagles from scoring their third goal. A substitute, Lucky Tharana, scored with a volley from the free kick.

Blue Eagles are in the second position on the Stream D league log, following the victory. 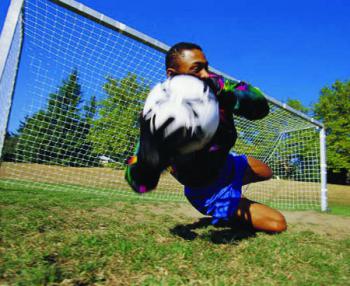