The promising 10-year-old local soccer star, Rirothe Junior Manentjie, had received a “thumps up” from development coaches at the Bidvest Wits Football Academy in Gauteng.

Rirothe was selected during Hollywoodbets' Masters Cup that was held at Mabaleng Sports Grounds under the auspices of Mamu Community Development and had participated in the trials from the 13th to the 17th of this month.

Mamu's general secretary, Mr Jafter Mamugudubi, said that they had waited for a week for the academy to send Rirothe's feedback report and, when it had reached them, they had been satisfied with the results. “This boy's beautiful story adds to the success and value of Mamu in our district and province," said Mamugudubi. "We are writing a beautiful story on the page of community upliftment and development for our young boys."

Bidvest Wits Football Academy's head coach of development, Mr Ashley Makhanya, said that Rirothe had made a very good first impression on the field, especially for a boy of his age. “We would like to keep monitoring his progress in future and we think the Easter, June and September school holidays would be an ideal opportunity for Rirothe to come and train with us again,” said Makhanya.

Rirothe's father, Mr Mashudu “Mayoyo” Manentjie, had expressed his expressed his joy and excitement. “I knew my boy would make it, and I am really satisfied with the feedback report from the football academy,” he said. 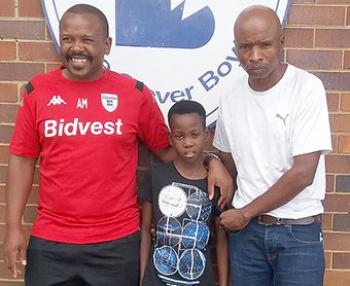 A promising soccer star in the making, Rirothe Junior Manentjie (10), is phographed with his coach at the Bidvest Wits Football Academy, Mr Ashley Makhanya (left), and Mr Jafter Mamugudubi.