Last weekend was a joyful one for Gwamasenga United Brothers. Not only did they collect six points in the two MMK Administrators League matches they played over the weekend, but they managed to score seven goals.

Zwidofhela “Ndoro” Musandiwa, the Brothers’ lethal striker, was a marvel to watch in both matches. He scored a brace against Blue Eagles on Saturday. As if that was not enough to impress the team’s fans, Ndoro scored a hat trick in their game against Cobra Stars.

Their game against Cobra Stars provided the maximum entertainment from the onset to the end. At one stage, United Brothers were leading 3-0. Their opening goals came four minutes into the game. Ndoro was brought down within the box and the referee, Mr Fhulufhelo Masindi, awarded a penalty to Brothers. Ndoro made no mistake from the white spot.

He was on target again nine minutes later. He beat the keeper with a half volley. Tshifhiwa Khameli scored the third moments later.

Cobra Stars did not lose hope, even though the Brothers’ victory was almost certain. They pulled one back through Munewanga Mudau in the 34th minute. They also received a penalty after Excellent Nekhavhambe was brought down within the penalty box.

Cobra Stars increased the margin to 3-2 towards the end of the first half. Mulalo Ranwedzi beat the keeper with a ground cutter. He finished off a rebound, following Khodani Netshilindi’s attempt. The visitors put the matter beyond doubt when Ndoro Musandiwa completed his hat trick with a header after a square pass from Khadani Davhula. 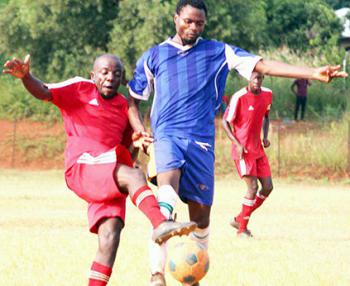 Excellent Nekhavhambe of Brothers (left) and Thembuluwo Mabula of Cobra Stars wrestle to win the ball.