Stars managed to match Defenders pound for pound in the early minutes, but their fighting spirit vanished over time. Defenders could have scored more than a dozen goals, had they managed to convert all their chances.

The game was characterized by rough tackles in the first half. Defenders scored their first goal after Lucky Buasi dished a well-cooked pass to Tshepiso Kgamedi, who scored after a scramble for the ball within the box. Stars did not stop fighting, despite conceding the early goal. They created numerous scoring opportunities, but their strikers let them down by shooting aimlessly from close range.

Defenders increased the margin when Kgamedi found the net after a neat pass from Emmanuel Mphephu.

In the second half, Defenders were dictating terms in all departments. The midfielder-cum-striker of Defenders, Ndaedzo Mareda, was booked for wasting time. Tshepiso Kgamedi received a loose ball from the left corner and beat the Stars keeper, Tshimangadzo Masala, with a ground cutter and completed his hat trick.

Ndaedzo Mareda scored his team’s fourth goal by sending the keeper the wrong way with a close-range half volley from a free kick. Maanda Magoro of Stars shot straight to Pfano Malatjie, the keeper of Defenders. 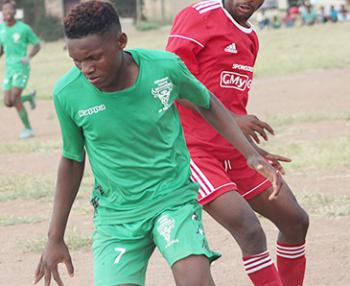