Black Leopards might be lying at the bottom of the log, but they are not worried about the fact that their future as an affiliate of the Absa Premiership Division looks bleak. According to the team’s head coach, Mr Allan Clark, they have done enough as a team during the past weeks to prepare for the resumption of the league programme.

Speaking from his home in Durban, the soft-spoken mentor said that he was satisfied with the training sessions they had had. He revealed that he was monitoring the players’ training sessions from home through the Zoom App and that all the players were physically strong enough to absorb any amount of pressure. He revealed that his only cause for concern was the fact that the players had been training on their own for about eight weeks now without playing the ball.

He went on to say that it was his wish to see the league programme resume as a matter of urgency. He further stated that he would need about a week to prepare his players to play as a team, should the authorities decide that the league programme can resume.  Asked to comment about the future of Black Leopards as an affiliate of the Absa Premiership Division, Clark stated that Lidoda Duvha would retain their elite league status.

The 40-year-old coach reiterated that the Thohoyandou side would collect enough points in their remaining six matches to make them survive the relegation axe, come end of the season. He further revealed that he could not wait to come back to Thohoyandou, saying he was not used to getting a salary without sweating.

Asked about the latest developments regarding the injuries for the team’s first choice of goalkeepers, Jonas Mendes and King Ndlovu, Mr Clark revealed that the two men had fully recovered. He stated that the duo had joined the rest of the players in the training sessions two weeks ago. Mendes suffered an ankle injury in their Nedbank Cup game against Amavarara FC at the Thohoyandou Stadium about three months ago. Ndlovu sustained a knee injury a few days after the Mendes incident. 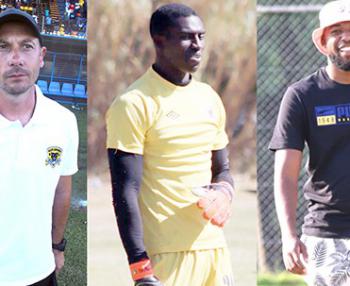