South Africa’s national 200m record holder, Clarence Munyai, was supposed to run against the best in the world in the coming months, but because of the lockdown, all the races were called off.

"I was supposed to run in China this month, the Diamond League and world challenge races in Europe in June and July just before the Olympic Games,” he said.

"It encourages me that I am still young, and I will run with big names in future. My parents keep on encouraging me to train hard to achieve my dreams.” He hails from Ramaru in the Nthabalala area.

Munyai started running at Heronbridge College, where he participated in all types of sports. His rugby coach told him to focus on running, because of how quick he was on the field.

He then moved to the University of Pretoria, where he started training and taking running seriously. Munyai won several 300 and 200 metres races nationally and abroad last year. In international 200m races, he won a race in Belgium, finished second in Switzerland, and ended in third position in Shanghai and Ostrava.

He is currently studying law through the University of South Africa.

He encourages young athletes to never give up on their dreams and always work hard and believe that anything is possible, if you put your mind to it and work for it. "I was motivated by Usain Bolt and Justin Gatlin; they are two of the greatest athletes the sport has ever seen. I would watch them on TV and always tell myself I was going to work so hard that I, too, could one day try and emulate what they did on the world stage. I was also motivated by the desire to win. I am a very goal-oriented person. I set out goals for myself and that motivates me and keeps me striving to try and better myself at all times." 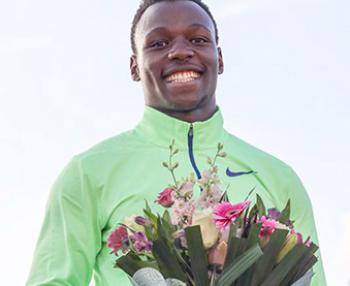