Well-known former professional soccer star Tshilidzi "Chilies" Doboro of Matanda village is confined to a wheelchair after his leg was amputated because of diabetes.

Doboro started to play football at Matanda Golden Arrows before he was recruited by Joel Masutha, who was Black Leopards’ goalkeeper then. He was still 15 years old at the time. He later joined HP Silver Stars after businessman Joseph "Tycoon" Mapfulagatsha bought the status, and he was coached by the well-travelled coach, Mr Owen "Thifhuriwi" da Gama for almost 10 years. He then went to play for Mpumalanga Black Aces and Maritzburg United.

Doboro, who caused many headaches for his opponents during his days, said that he started feeling pain in February and was admitted to Edenvale hospital in Gauteng. The doctors and the hospital advised him to amputate his leg. He added that this was not acceptable to him at that time.

Doboro said that he had asked the hospital management to transfer him from Edenvale to Siloam hospital, where they had finally amputated his leg last month. He said that he was struggling without food at this time because he could not afford to buy food.

His former coach, Mr Owen da Gama, said that he had been shocked when he had heard that Doboro’s leg had been amputated. Da Gama’s words of encouragement for the former player were that he hoped that he would heal soon mentally and emotionally. "This is so touching, because we have lost somebody who could have contributed a lot to the young ones.

Former Leopards coach Mr Joel Masutha, who had introduced Doboro to professional football, said that seeing him in that condition was not easy. He said that Doboro needed support during this time and he visited him to donate some groceries. "I bought him some groceries to remind him that I care, and he still has all my support because he is one of us. I also felt it was important to bring the little I have, so that he can eat with his family,” he said. 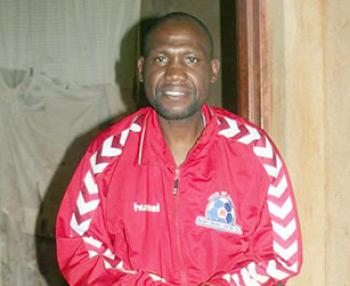