“Rugby is also a sport for women”

Young Vhugala Ndou of the rural village of Gaba excels in the male-dominated sport of rugby.

She started playing rugby in high school. She said when she was at school she participated in athletics, but when she was in Grade 11 in 2015, they introduced rugby at school. She joined the rugby team because she wanted to be fit for her athletics.

She said that the rugby coach was impressed with her progress in rugby and she made the Lions U/16 team and travelled to Cape Town.

Ndou is a hardworking rugby player who strives to be the best in everything she touches in life. She holds a degree from the University of Johannesburg. She is always willing to learn new things as well as achieve greater heights. She is currently studying at the University of Western Cape (UWC) in sports recreation and exercise science, as well as playing for the rugby team there.

However, she is trying to get into the Western Province senior women’s 15s team. She believes that room for improvement can always be found. She is also playing for the UWC rugby 7s team. "I am also part of the Springbok students and the Ladyblitz team.” Unfortunately, because of the outbreak of Covid-19, the world student tournament that was supposed to take place in Argentina this year was postponed.

She encourages ladies that rugby is played by men but perfected by women. "There is no sport that was designed for certain genders. As women we are restricted a lot and undermined in this game, which gives us more reason to prove people wrong." 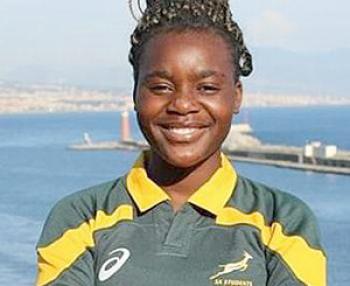