One thing that the former president of Tshakhuma Tsha Madzivhandila (TTM), Mr Masala Mulaudzi, has emphasized after procuring the Absa Premiership franchise from Bidvest Wits FC was that the status he had bought was a full package that included all the players.

In an interview with Limpopo Mirror, Mulaudzi revealed that he was searching for a coach who would take over from Mr Gavin Hunt at the end of the season. When asked why they were not keeping Mr Hunt as the team’s head coach, Mr Mulaudzi was quick to state that the Cape Town-born Hunt was no ordinary mentor. He described Hunt as a high-profile tactician who was not easy to maintain. He said that while it was their intention to appoint a knowledgeable coach for the team, retaining the former Black Leopards coach would not be possible.

He stressed the fact that Hunt was at liberty to apply for the job if he was interested. At the age of 55, Hunt’s coaching history speaks volumes. He won silverware three times with SuperSport United before moving to Bidvest Wits, the club he steered to the 2016/17 season league championship. Some of the teams that Hunt had coached before include Black Leopards, Moroka Swallows, Hellenic FC, and Seven Stars.

Hunt’s monthly salary is believed to be just over R600 000. Asked about the big-name players who were still contracted to Bidvest Wits, Mulaudzi revealed that they were negotiating retrenchment packages with several of them, in line with the Labour Relations Act. According to him, it would be difficult for him to maintain the salaries of all the high-earning players who were still contracted to the club, just like with Gavin Hunt.

He refused to disclose the names of the coaches he was negotiating with. He appealed to the supporters to give him space for some time, saying he would soon find the right person for the job. Mulaudzi further stated that he had advised some of the so-called expensive players to search for new jobs elsewhere.

Asked about the names of the players they would let go, Mulaudzi said that it was still too early for him to speculate. Some of the high-profile players who are likely to jump ship include Thulani Hlatshwayo, Gift Motupa, Cole Alexander, Deon Hotto and Buhle Mkhwanazi.

Mulaudzi said, however, that the former Black Leopards midfielder, Phathutshedzo Nange, was one of the players who were part of their future. Nange joined “The Clever Boys” early this season, following the expiry of his five-year contract with Lidoda Duvha at the end of last season. 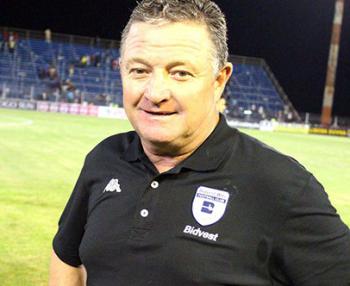