TTM show that they can compete

Tshakhuma Tsha Madzivhandila FC (TTM) may have been booted out of the MTN 8 Cup competition in the quarterfinal stage, but the team’s future looks bright. Vhadau Vha Damani, as they are also known, lost 2-3 to Supersport United at the Thohoyandou Stadium last Saturday. Judging from the team’s performance against Supersport United, soccer fanatics are positive that TTM are not in the DStv Premiership Division just to add to the numbers.

According to them, the Tshakhuma side have the potential to make the Limpopo Province proud in the near future.  Many of them indicated that TTM could have buried Matsatsantsa alive, had it not been for the fact that most of their players were not available for that game. Although the president of the club, Mr Masala Mulaudzi, revealed during the media conference last Thursday that they had registered 28 players, only 14 were eligible to play in their match against Supersport United. Mr Mulaudzi revealed sadly that the league had failed to print out the registration cards for all their players because of technical problems.

TTM managed to absorb the heat from the opposition from the onset to the bitter end, despite the fact that they had only three substitutes, including a goalkeeper, on the bench in the form of Thabo Mnyamane, Edgar Manaka and goalkeeper Washington Arubi.

Fortunately for TTM, their players did not suffer injuries during the game. The only substitution the local lads made in the game was when they brought in Thabo Mnyamane for the former Black Leopards forward, Mogakolodi Ngele, later in the game.  Ngele scored a brace in the game before the team’s head coach, Mr Joel Masutha, decided to give him a well-deserved rest.

Some of the TTM’s high-profile players whose registration cards were not available last Saturday include Augustine Mulenga, Brian Onyango, Thembisani Nevhulamba, Mpambaniso Monde, Lebohang Mabotja, Aluwani Nedzamba and the Venezuelan international, Gustavo Paez. Mr Mulaudzi stressed the fact that all their players will be available for their home league match against TS Galaxy at the Thohoyandou Stadium on Sunday. 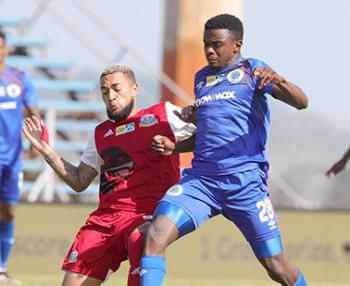 Teboho Mokoena of Supersport United (right) and Miguel Timm of TTM in a tussle to win the ball. Photo supplied.