Black Leopards may have lost three and won only one of the four matches they have played so far, but the team’s new head coach, Mr Dylan Kerr, is adamant that Lidoda duvha are still on track.

The Englishman was announcedas the team’s head coach last week. This followed after the Thohoyandou side parted ways with the Belgian mentor, Mr Patrick Aussems.

Black Leopards played three league matches under the guidance of the 55-year-old Aussems. Apart from the fact that the team failed to deposit a single point into their league account under his guidance, the pride of Thohoyandou conceded seven goals in the three matches. The team’s poor running in the first three league matches did not sit well with the management of the team, hence Mr Aussems’ dismissal.

Mr Kerr was not on the team’s technical bench when Leopards beat Maritzburg United 1-0 at the Thohoyandou Stadium last Saturday, pending the issuing of his work permit. The team’s assistant coach, Mr Morgan Shivambu, was in charge of the team on the day. The 53-year-old Kerr was giving instructions to the players in their game against Bloemfontein Celtic at the Dr Molemela Stadium in Bloemfontein on Wednesday evening. The result of this match was not available at the time of our going to print.

During an interview, Kerr indicated that he was happy with the current squad and that his team had the potential to make the Limpopo Province proud. The former head coach of Baroka FC further stated that the fact that Black Leopards had three points while the pace setters, Swallows FC, had 11 points, was an indication that anything was still possible.

Mr Kerr again stated that his wish was to see Leopards lifting a trophy or two during his tenure as the team’s head coach. He said that the fact that their next match would be on Tuesday, 8 December, would give the players time to get used to his coaching philosophy.

Leopards’ next match will be against Kaizer Chiefs at the FNB Stadium in Johannesburg. 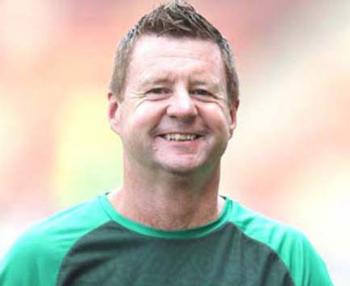