Maindis go through to semi final

The Maindis ladies’ soccer team proceeded to the next round of the Vhafuwi Soccer Challenge when they beat the Tshakhuma Tsha Madzivhandila (TTM) ladies team 3-0 in their quarter-final match played at Magau on Sunday (12th).

Although TTM lost cohesion in the middle of the park at one point, their dribbling wizard, Mulalo Mufanadzo, remained a thorn in the flesh of their opponents’ defenders. Mufanadzo came close to scoring in the eighth minute when she tried her luck from the edge of the box. The ball missed the goalmouth by inches.

Maindis took the lead in the 10th minute. Linkie Twala beat the offside trap and showed the keeper the wrong way.

TTM did not give up without a fight. They continued to fight collectively, with their midfielders dishing out some telling passes to the goal poachers time after time. The first goal did not demoralize TTM as they continued to play like a united team, creating some promising moves from the middle of the park.

Maindis increased the margin in the 29th minute. This came after TTM’s defenders started to concentrate on setting offside-traps and not marking tightly. Linkie Twala completed her brace by beating the offside-trap and sending the TTM keeper, Granny Theleli, the wrong way.

Maindis enjoyed their 2-0 lead until the referee, Mr Mayala Malange, blew the half-time whistle. The only player who was reprimanded with a yellow card was Londolani Negota of TTM. She tackled from behind and the referee was quick to flash yellow.

Maindis scored one more goal when Thembi Minyuku was on target in the 69th minute. She beat the keeper with a volley after she had finished off a square pass from Lebo Thavhana. 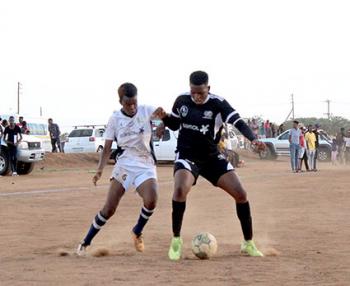