A win continues to elude Limpopo

The boys from Limpopo came up against the Toyota Vikings on Saturday at the Louis Trichardt oval and managed to accumulate 89 runs before the last wicket fell in the 18th over (18.1). Opener Chris-Jan Hendriks made a valiant effort to keep the score board ticking over with a helpful 30 runs off only 20 balls, which included four fours and two sixes. Sadly, no other Limpopo batsman could really get going, with only Juan-Michael Phillips (12), FC Philipson (15) and Daniel Coetzee (11) managing double figures off the bat.

Restricting Limpopo to only 89 runs was the result of a well-disciplined Viking bowling attack, which saw them only concede eight extras. Bowler Craig Viljoen outshone his fellow bowlers with an economy rate of 2,00 by toppling four wickets for the loss of only eight runs in his four overs, which included one maiden over. Jandré Hancke managed to take two wickets for the loss of 22 runs in his four overs, while Leon Furstenburg, Louis van Jaarsveld and Waldo van Deemter each took one wicket.

Limpopo knew that if they had any chance of winning the match, their bowling had to be tight. And tight it was, offering the Vikings batsmen little opportunity to get going, with wickets tumbling at fairly regular intervals. The Limpopo bowlers only conceded three extras.

Similar to Limpopo’s innings, only four Vikings batsmen managed double figures, namely Morné Olwage, (17) Warno Smit (10), Kobus Barkhuizen (13) and Waldo van Deemter (20). The Vikings batsmen, however, did enough and steered their team to victory in 18.2 overs with 90 runs on the scoreboard and three wickets to spare.

Vimal Shah was the only Limpopo bowler to take down more than one wicket, ending on figures of two for 13 in his four overs. The rest of the wickets were distributed among the rest of the bowling attack, with FC Phillipson, AJ Fourie, Gerrie Oelofse, Joubert Fourie and Chris-Jan Hendriks each claiming one scalp.

This coming Saturday, 1 May, the Drillers will take on the Strikers at the Louis Trichardt oval. 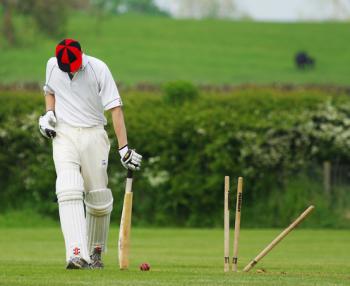