All eyes will be on the happenings at the Giyani Stadium on Sunday afternoon, where the much-awaited Hollywood Bets Super League match between Maindis Ladies FC and First Touch Ladies will take place. Apart from the fact that the fixture is a derby, the two teams have one goal in common. Maindis and First Touch are aiming to finish their league programme among the top eight teams.

A quick glance at their standings on the current league log shows that their set targets are achievable. First Touch are lurching in the fifth spot on the log, with 26 points accumulated from 13 matches. Maindis are perched in the ninth position on the log with 14 points. Maindis had played a match more than First Touch.

Maindis are still in mourning, following their 0-2 defeat at the hands of JVW FC at the Tsakane Stadium in Johannesburg last Saturday. First Touch failed to impress their supporters when they shared the spoils with Richmond United, with whom they played to a goalless draw at the Seshego Stadium last Saturday. Should they manage to collect the maximum points on Sunday, First Touch are likely to jump to the third spot on the log standings.

University of the Western Cape FC will fly to Johannesburg. Their match against Thunderbirds FC will take place at the Dobsonville Stadium. Richmond United will lock horns with Coal City Wizards at the Harry Gwala Stadium in Pietermaritzburg. Golden Ladies will undertake a journey to Johannesburg, where they will play against JVW FC at the Orlando Stadium. 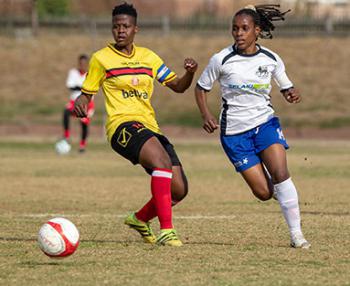