The opening matches for the Masawe Soccer Tournament will start this weekend. The tournament was officially launched during a ceremony held at the Masawe Car Wash last Sunday.

Two preliminary-round matches will be played at the Tshitereke Citizens Grounds on Sunday. Mavhola Newcastle will entertain Rallies Stars FC in the first match, which is scheduled to start at 13:00. Makhuvha Up The Ants will meet Gooldville Young Tigers in the last fixture for the day.

The quarterfinal matches will be played at the Vhufuli Gooldville Young Tigers Grounds on Tuesday, 21 December. The day’s programme will be opened by the match between Vhufuli Pull Together and Vondwe United Brothers at 09:00. Domboni FC and the winner in the preliminary-round match between Mavhola Newcastle and Rallies Stars FC will then do battle. Tshitereke Citizen Stars and Ngudza United Brothers will clash shortly after midday. The day’s programme is to be wrapped up by the match between the winner in the preliminary round between Makhuvha Up The Ants and Gooldville Young Tigers and Vhufuli Dangerous Scorpions.

According to one of the organizers of the tournament, Mr Cedrick Ramaliba, this year’s champions will take home R8 000, a soccer kit, gold medals, a floating trophy and 15 pairs of soccer boots. The runners-up will receive R5 000, a soccer kit, silver medals and a soccer ball. The third- and fourth-placed sides will be presented with R2 000 and R1 000 respectively. Teams booted out of the tournament in the quarter-final stage will each receive a consolation prize of R500 and a soccer ball.

The semi-final and final matches will be played on Sunday, 26 December. 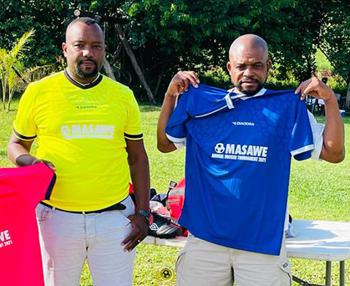