The MJN Foundation Soccer Challenge was officially launched at Ravele on Sunday (12 December).

Two streams, comprising 16 teams and eight teams respectively, will compete against each other in the tournament. MJN Foundation’s secretary, Mr Thendo Mavhandu, said that the Top 16 champions would walk away with R12 000, a floating trophy, soccer jerseys and gold medals. The runners-up will get R7 000, a soccer kit and silver medals. The two teams ending up in third and fourth position will walk away with R4 000 and R3 000. Some prize money will also be given to the other top teams. In the Top 8 stream the winners will receive R5 000, while the runners-up will get R3 000.

Mavhandu said that future stars’ talent needed to be identified at grass-roots level. He mentioned that Vhembe was a region rich in talent and that “we have, over the years, seen some talented South African soccer players being unearthed from this area”.

The tournament will start on Christmas day at four venues, namely at the Madombidzha, Ravele, Madabani and Manavhela grounds. The final will be played on 30 December at the Ravele Grounds.

The fixture at the Madombidzha Grounds are: The first match on 25 December - Hamula FC vs Ramantsha FC at 11:30; Maelula United Brothers vs Makhitha Oscar Stars at 13:30 and Madombidzha Try Again vs Muduluni Young Chiefs at 15:30.

At the Ravele Grounds: Mubva All Stars vs Madombidzha Try Again at 11:30; Magau United vs Legendary FC at 13:30; Madrid FC vs Tshikhwani Stone Breakers at 15:30.

The winners will play their second-round matches on 27 December. 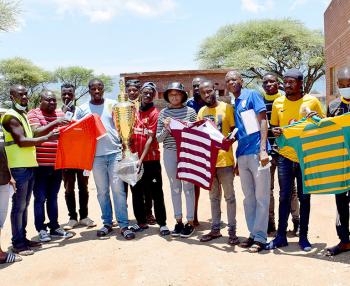 Representatives of the various teams, photographed with soccer kits and the winning trophy during the launch of the tournament. Photo: Kaizer Nengovhela.