The name Yahya Jiwa is still well known in the local cricket fraternity. This is a name that instilled fear among many bowlers in the 1990s. The stubby batsman could single-handedly destroy any bowling attack, and his ability to pick up on a short-pitched ball and dispatch it over the boundary is legendary.

Yahya arrived in Louis Trichardt in the early 1990s, coming from India, where he played cricket alongside legends such as Sachin Tendulkar. In the Soutpansberg, he participated in the local leagues, but with little exposure to top-quality players, his chances of being noticed were slim.

In the late 1990s, a special exhibition match was held to officially open the new cricket field in Louis Trichardt. Two former national players, Fanie de Villiers and Clive Eksteen, were invited to take part in this double-wicket competition. Yahya partnered with Fanie, and in the final match, the two came up against the former Protea spinner. Yahya literally hit Eksteen out of the park, and he so impressed the latter that he was invited to take part in trials for the then Transvaal side.

For a variety of reasons, Yahya never went on to become a regular player in one of the country’s top teams. Perhaps he might just have been past the prime of his career when he finally had an opportunity to show his mettle, or perhaps he just needed that final bit of luck. Sadly, his rare talent was only fully appreciated at local level in this country.

Yahya’s love of the game never faded, and he ploughed back his knowledge into coaching. Before leaving India in 1990, he had already become a professional coach and completed the necessary accreditation courses. Apart from private coaching, he also coached at schools such as the Sutherland High School in Centurion.

In July 2021, he received an invitation to coach the U/19 side of Tanzania. He grabbed this opportunity with both hands and immediately set about to prepare the side for their first challenge – the T20 World Cup qualifying tournament.

Tanzania, not being one of the world’s top cricket-playing countries, has to compete against other African countries to qualify for the major tournaments. In October last year, the U/19 side travelled to Kigali in Rwanda, where they came up against teams from Namibia, Uganda, Nigeria and Rwanda.

For Yahya this was an exciting new experience, and the team did extremely well. Prior to the last match against Uganda, the Tanzanian side were the log-leaders, scoring victories over Namibia, Rwanda and Nigeria. Unfortunately, the team lost badly against Uganda, causing the nett run-rate to drop. The top three teams all ended with four points, but Tanzania dropped to third position and failed to qualify for the World Cup.

Yahya visited Louis Trichardt the past week and paid a quick visit to the newspaper’s office. He was very enthusiastic about the future of cricket in Tanzania and the abundant talent in this East-African country. “In two years’ time, Tanzania will be competing in the various World Cups,” he promised.

What impresses Yahya most about the Tanzanian players is their commitment and willingness to work hard to achieve success. A lot of young talent is also coming to the fore, such as 14-year-old spinner Laksh Bakrania, who made his debut for the U/19 national side in October.

Cricket as a professional sport is not well-established in Tanzania. Most of the top players have to do regular work during the day and practise after hours. In spite of this, the players achieve what many full-time players struggle to achieve.

As part of his duties, Yahya also coaches the women’s U/19 national side. He proudly mentions the name of Fatuma Omari Kibasu, who scored a record 127 not out against eSwatini in September last year. Cricket as a sport for women is also growing in Tanzania and a lot is expected from the ladies in the next few years.

Currently, Yahya is the bowling coach for Tanzania’s senior men’s side, alongside another prominent African cricketer, Steve Tikolo. Tikolo is a former captain of the Kenyan ODI side. He is widely regarded as the greatest Kenyan cricketer ever, scoring the most runs and taking the second-most wickets for the team in one-day internationals.

Yahya will be returning to Dar es Salaam, capital of Tanzania, next week where he will continue preparing the senior national side for the next challenge, which will be the East Africa Championships to be held in Kenya in July.

“Currently, the focus in Tanzania is only on T20 tournaments, but we are including 50-over matches in the programmes,” said Yahya. Cricket as a sport may be in a developing phase in Tanzania, but for coaches such as Yahya cultivating a love for the game is important, which includes the longer version of this popular sport. 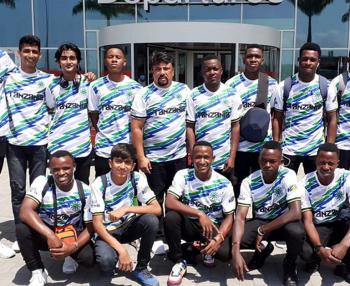 Yahya Jiwa (in the centre at the back) with the U/19 Tanzanian side. Photo supplied.