The much-awaited semi-final and final matches of the Safa Vhembe Champ of Champs will be staged at the Thohoyandou Stadium on Sunday. The first semi-final match will be between United Artists and Tshimuthe FC, which is scheduled to start at 09:00. The match is expected to be the final before the actual final.

Tshimuthe’s killer striker, Parnell Didzolapi, will watch the game from the grandstand. Didzolapi is serving a suspension after seeing red in their game against Rabali Pull Together at the Saselamani Stadium two weeks ago. The likes of Godfrey Mavhungu, Tsiko Khothisi and Tshanduko Singo will be expected to do the job in the absence of Didzolapi.

The winners in the semi-final matches will meet in the final later in the afternoon. The champions will represent the Vhembe Regional Association in the provincial promotional playoffs that will be staged at the Seshego Stadium over the weekend of 2 and 3 July. The best two teams in the provincial playoffs will be promoted to the ABC Motsepe League. 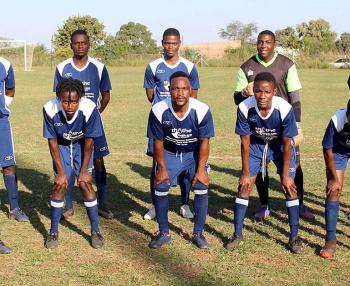 One of the favourites to lift the trophy, Tshimuthe FC. Photo: Frank Mavhungu.