The Louis Trichardt Parkrun is back in full swing, and residents are welcome to take part in the 5km run/walk on Saturday mornings. During the winter season, the run starts at 08:00, still at the park next to the information centre along the N1.

Louis Trichardt’s 63rd Parkrun on Saturday was attended by a smaller number of Parkrunners than usual, due mainly to the large number of events happening in town on the same day. The group of enthusiasts included two visitors from Gauteng, namely Rob Millerd and John Horrocks.

Rob Millerd is a Parkrun fanatic, and he completed his 289th Parkrun on Saturday. What makes this even more impressive is that he has done this at 199 different Parkrun venues. He spent some time in Japan and 24 of his Parkruns were completed there. Whilst in Japan, he helped establish the first Parkrun in Japan at Futakotamagawa, Tokyo.

Rob was in Louis Trichardt on business and decided to stay for the Parkrun. Both he and John’s home venue is the Delta Parkrun in Randburg, Gauteng.

John Horrocks visited Louis Trichardt to support his wife, who was riding the Kremetart cycle race. On Saturday, he completed his 216th Parkrun at his 70th different venue. Rob finished first on Saturday, with John coming in fifth.

Parkruns are free community events, for walkers, runners and volunteers and are held weekly at 194 venues in South Africa with more than 2 000 venues in 23 countries worldwide. As Saturday’s visitors have shown, Parkruns can be an excellent way to connect with different communities wherever you find may yourself.

Sign up for free at www.parkrun.co.za, print out your barcode and come and join in. 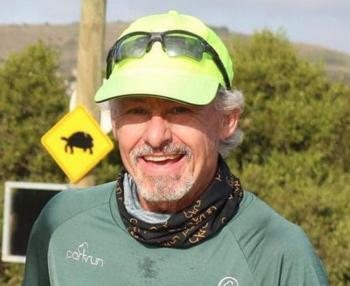