Running champion with no money

A legend in local road running circles, Fhatuwani Rambuwani, recalls that his prize after winning his debut 21km marathon in 2005 was a 25-litre plastic water container, a keyholder and a T-shirt.

“I was not deterred by the prize, because running is in my blood. I remember my friends laughing at me for running such a long distance, just for a water container, but to me it was a great achievement,” he said.

Rambuwani started running long distances when he was still at primary school. As his parents could not afford the transport fare, he used to run 14km every day to and from school.

“It was very painful, but there was nothing I could do. After school, when my school mates waited for transport, I would just run home barefoot. When they passed me along the way, some would laugh at me, calling me all sorts of names,” he said.

He started running seriously when he was at secondary school. Then he participated in the Protea Furnishers 21km in 2005, where he won his plastic water container.

He added that, throughout his career, he had gone through very difficult times to participate in some of the events around the country. When he participated in his first Comrades Marathon, he had no money for transport and had to hike from Tshilamba in Mutale to Durban.

“I had less than R200 in my pocket, but with the will to participate, I made it to Durban. I got a lift from Mutale to Thohoyandou, then to Louis Trichardt, where I was given a lift by Mike Madzonga to Johannesburg. He left me at a hiking spot, where a truck driver gave me a lift to Durban. When I told him my mission, he said I should not pay as I was going to run in the Comrades,” he said.

He arrived a day before the ultra-marathon and had to sleep on the floor at a local police station. He woke up tired and feeling pains all over his body, but he participated in the Comrades and ended in the 331st spot out of more than 14 000 people. Thereafter, he had to hitchhike back home. A fellow participant gave him a lift to Alexandra, and then he slept at Pretoria Central Police station for a day before one of his relatives sent him transport fare to come back home.

Today, he has very little to show for all the hard work he had to endure for more than 18 years. He is only left with the memories. When asked what kept him going as he was not making money at all, he said he had been born to run. “As long as my heart still beats, I will continue running,” he added.

“The main reason why we are not producing athletic champions in the Vhembe District is the lack of sponsorship. There are a lot of businesses around the district, but they are all looking at other sporting codes, especially football. I have just lost two athletes from my club to other teams in Polokwane because of a lack of training equipment and opportunities to participate nationally. I am calling on the business community to help up-and-coming athletes to realise their dreams,” he concluded.

Rambuwani is a security officer at Todani Secondary School in Tshilamba. 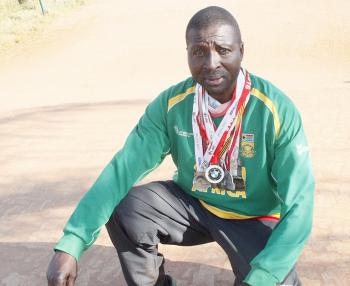