Black Leopards FC will be able to play their home matches at the newly revamped Malamulele Stadium when the 2022/23 soccer season starts in September.

Leopards hosted their 2021/22 matches at the Old Peter Mokaba Stadium in Polokwane, following a fallout with the Thulamela Municipality (who owns the Thohoyandou Stadium) over the R27 000-per-match fee charged to utilise the facility.

Leopards have moved their training programme to Saselamani, an area that falls under the Collins Chabane Municipality, and will also see their matches being played at the Malamulele Stadium.

Senior PSL official Prof Ronnie Schloss visited the stadium early in January this year and asked the municipality to fix some of the areas at the stadium. The dressing rooms and the pitch were not in good condition.

Schloss visited the stadium again for inspection on 19 July to assess the progress and said he was confident that the stadium would meet all the necessary requirements after the work had been completed. “The last time I was there for a preliminary inspection‚ the pitch was still not playable, but it will be improved and ready‚” he said.

Mr Robert Mathye of the Collins Chabane Municipality said that they had been working around the clock to ensure that the stadium complied with the criteria placed on stadium safety. He was confident that the facilities would be up to standard when the new season started. “We are very happy to welcome Black Leopards to their new home ground,” he said. Mathye said the stadium, after the construction of the new pavilion, could accommodate 15 000 spectators. He said that the municipality planned to improve the stadium even more in the coming years.

Black Leopards’ chairman, Mr David Thidiela, said his team was very excited about having their own home ground. He thanked the municipality for the good work done. 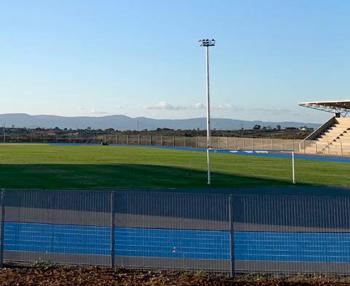