Venda Hustler is moving along with technology

When things take a turn for the worse in any industry, not everyone makes it to the other side. Mboswobeni “30 Cent” Mulugana, however, is one of the lucky ones.

This highly talented and skilful film maker has incepted and produced many comedy films over the years, including his debut 30 Cent, Asi Muvenda, The Venda Boys, 30-Cent IV - The Mechanic, 30-Cent V - The Venda Boys, and 30-Cent VI - Original Venda Hustler.

“With the introduction of DVD, piracy and digital streaming of motion-picture material, many of us film makers and producers felt really challenged to come up with new ways to make our material digitally profitable,” he said. “That was not easy, as we spent a lot of money making these movies, and to just upload them on the Internet for free access by the public was not going to make sense at all.”

Mulugana, who originally hails from Folovhodwe Village, said the biggest challenge had been to educate the consumer, who used to buy their films on DVD, to start doing so via online digital stores instead.

“We made a lot of money selling our work on DVD, but DVDs are being phased out, so now we do it digitally,” he explained. “But not everyone knows how buying films via online digital stores works. Many people still think that if they purchase it online, they expose themselves to Internet scammers. That is not the case.”

The film maker has already started shooting a few episodes for his ground-breaking upcoming digital show, 30 on HD, which will be available online in September. “This is an amazing, laughter-packed show that tackles social issues, current affairs, myths and stereotypes in a light-hearted manner,” he said. “We bring a varied selection of talented artists across the industries, as well as regular people who might not come from that background at all.”

Mulugana, who calls himself a “Venda hustler”, was inspired to start his own clothing range after a visit to France. Walking through this foreign country, he was amazed to see fashion designers sewing and designing clothes from the side of the streets. “I came to the conclusion that the kind of clothes they were making could sell in South African stores as well. More importantly, I realised that we delight more in foreign clothes and forget that we can do more on our own.”

But the general lack of support for local business in this country, he says, can unfortunately make it hard for anyone. “I think that the lack in motivation for us to succeed started with the education system, which taught people to be buyers instead of makers,” he said. 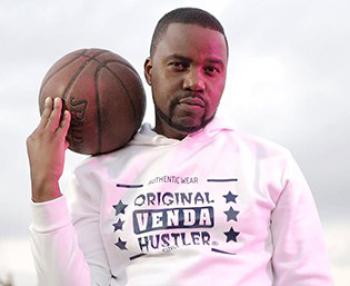 Mboswobeni "30 Cent" Mulugana is a visionary who stops at nothing to be innovative. Picture supplied.