Have you ever imagined yourself going to sleep with your bank account empty and waking up the following day with a fat bank account of half a million rands? This is said to be happening at Lambani outside Thohoyandou.

Rumours of the miracle money started doing the rounds over the past weekend when residents of Lambani had massive bank account balances after being prayed for by a local pastor. The Tower of Prayer Christian Centre at Ha Lambani-Nzanwe where the miracles are happening has become a centre of attraction overnight.

The vision holder of the miracle money is Pastor Azwihangwisi Nemavhoyini, the founder of the church. News of the miraculous money has left the sleepy rural village of Lambani bursting with visitors from all corners of the country.

A team from Limpopo Mirror visited the village on Tuesday morning to get firsthand information about the windfalls in the village. Contrary to expectations of change in the lives of the local inhabitants, the village was still the same, with no activities such as massive buying sprees and the building of new houses, which is usually a sign of empowered communities.

Our first stop was just next to the church where the miracles were said to be happening, where we found locals waiting for taxis to town. Asked about the windfall in the village, the locals confirmed that "people" had received hundreds of thousands of rands after being prayed for by the pastor. When we asked, however, about their identities, no one seemed prepared to divulge the names of any of the lucky people.

On arrival at the church, we found no one there. The pastor said she was out of the village and that she would be back in a short while.

Mirror’s team waited for almost the whole day for the pastor to come back, and she later arrived, accompanied by Apostle Orbet Muyanalo, whom she referred to as her "spritual father".

The interview was very brief as many people had by then gathered at the church, waiting impatiently for the pastor.

During the interview, Muyanalo emphasised that Mirror should write the truth, which we assured them we did all the time. "I am a qualified teacher who was getting a full salary from the government for over 20 years when the call came to serve God. I started by building a church, even though there were no members then. Disaster struck, however, and my first church, which was almost complete, was demolished during a heavy storm, but this did not deter me," said Pastor Nemavhoyini.

She said the urge kept on coming and a conflict of interests was brewing as others would just come to her for prayers, even during school hours. "This forced me to quit and I officially resigned in January this year to take up full-time pastoral work. This was not well received by the community, with some thinking that something was wrong with me. Some even thought I could not cope without a salary and I would go back to my work as I was leading mostly unemployed people," she said.

She said the pressure from people who did not understand her prompted her to pray to God that He should do miracles that would shake the country and make those people understand her.

"I prayed that God would make money available and provide jobs for the unemployed. What happened is shocking. We had loads of money during a church service here, and many whom we prayed for confirmed that their old, inactive accounts were active again, with fat balances. Many also indicated that they had been booked for job interviews. Many were healed, such as one man who could not use his limbs for a long time. In everything that is happening, we have seen the grace of God. This makes us revere God and it is a sign that God never fails," she said.

Nemavhoyini said she was more shocked when she woke up on Tuesday to find people and a car from Gauteng at her yard, waiting for her to pray for them. "I am still very surprised that people from all the corners of the country are here for prayers. We never have church services here on Tuesdays, but we are forced to do so today because of the many people who have arrived here," she said.

Mirror had requested the pastor to invite some of the people who had "received" money to come to the church, but no one came to the special service. We had to come back to Thohoyandou disappointed, without seeing any of the miracle money. No mention has been made of banks where the withdrawals were made.

A miracle service at the church was scheduled for that evening. Limpopo Mirror is still awaiting feedback from those for whom prayers were said. At the time of going to press, none of those prayed for had confirmed the windfall.

Theological expert and Univen academic Rev Simon Nedohe said miracles still happened, but there should be proof. "When miracles do happen, it is not the one through whom the miracle happened to talk about, but those who received it should not hide it; there should be evidence. In this case, where no one is prepared to stand up and give evidence, we tend to put the name of God in disrepute, instead of giving honour to Him," he said.

A spokesperson of the police in Thohoyandou said that they had not received any complaints about the rumours and were not investigating the matter. 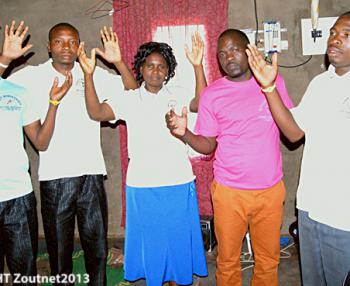 Pastor Azwihangwisi Nemavhoyini (third from left), Apostle Orbet Muyanalo (second from right) and the disciples during a service at the church.

The church was filled to capacity, with many remaining outside.

Waving their bank cards are some of the faithful who have come for the miracle.