Soccer star will never be forgotten

Family, friends and honoured guests converged at the Manyathela family’s home in Musina last Saturday, 4 September, to launch the Lesley Manyathela Foundation (LMF) formally. The day’s programme was proceeded by a visit to the spot where Manyathela had died, where a remembrance cross had been erected, and to his gravesite. The event was also meant to mark and celebrate his birthday posthumously as he would have turned 40 on this day.

Born on 4 September 1981, Manyathela was only 21 years old when he died in a car accident on 9 August 2003. The multiple award-winning soccer star was returning to Musina when his car overturned on the N1, only a few kilometres from his home.

Classified as one of the best soccer strikers South Africa had ever produced, Manyathela scored 48 goals in his 73 appearances for Orlando Pirates. He was also the top goal scorer for the Premier Soccer League in 2003. Famously known for his number 22 jersey, he played for the South African national team on five occasions, with his debut on 20 March 2002 during an international friendly match against Saudi Arabia. At the time of his death, he was about to secure a lucrative deal with the Ukrainian Club, Dynamo Kiev.

Manyathela’s mother, Gladys Manyathela, who is also the chairperson of the Lesley Manyathela Foundation, said the foundation’s launch was long overdue. “I’m still hurting from the loss of my beloved son, but I’m now consoled by the fact that, through the foundation, his name will never be forgotten. He left us at a time when his soccer career was blossoming, but he made us proud because he had put our little town on the world map.”

According to Gladys, the foundation aims to enforce social cohesion and community development initiatives in and around Musina. She said the foundation would work together with various stakeholders as an agent of change, while at the same time preserving the legacy of Lesley Manyathela.

Cllr Nkele Milanzi, who represented Musina Municipality during the launch, said that they would work with the foundation to conserve the name of the soccer star. “This is one of the main reasons why the Lesley Manyathela Stadium is being revamped – to match the name of the great man it was named after.” 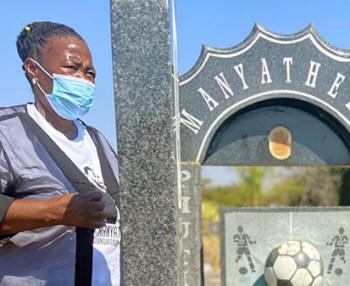