Tshifhiwa “Spider” Munyai of Makwarela beat his opponent, Khaya “Destroyer” Busakwe, via a technical knock-out (TKO) in the ninth round of their lightweight title fight on Friday night at the Sandton Convention Centre.

Munyai was all over Busakwe from the start and the latter was lucky not to be knocked out earlier. The only time when Busakwe took the fight to his opponent was in the fourth round, when he managed to push Munyai into a corner.

The fight, which was scheduled over 12 rounds, ended in the ninth round as Busakwe did not respond to the bell signalling the start of the next round. The referee opted to stop the fight as Busakwe was not able to continue.

Munyai approached the fight aggressively, throwing killer punches from all angles. That resulted in his opponent’s falling down in the fourth round. He survived the referee’s count and continued.

“My intention was to hurt Busakwe badly and end his career, because he humiliated me before our fight, calling me an amateur,” said Munyai after the fight. “I’m satisfied with how I performed.”

He thanked his trainer, Mr Alan Toweel, for guiding him every time. “I’m very happy that I’ve won, but my main goal is to go further into professional boxing, because I’m now ready. Boxing is a good sport that stops young people from engaging in bad habits such as drugs and alcohol, because you will spend lots of time at the gym,” he said. His message to young people who want to join boxing is that it does not matter where you come from, as long as you can be a good boxer.

“This boy will go places. He is dedicated to his trade, and I see a lot of potential in him. He is the next Mohammed Ali in the boxing industry,” said Toweel. He described Munyai as a dedicated and committed boxer who always attends training sessions and does well at the gym. “The man is very gifted and if he gets the necessary support, he has the potential to win any title,” he said. 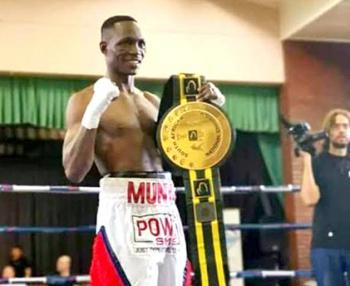