The Wakanda Forever hitmaker Sho Madjozi needs no introduction in the music fraternity.

The songwriter, singer and poet who hails from Shirley village in the Elim area has captured the country’s attention for some time. The energetic 29-year-old is nominated for this year’s BET Awards in the Best New International Act category. This past Sunday, she participated as a guest in the popular The Voice South Africa with an outstanding performance.

This musician performed the song Idhom while clad in a Cinderella-like dress.

Born to a Tsonga mother, Rosemary Phaweni, and Swedish father Marc Wegerif, Sho Madjozi told the Mail & Guardian in an interview last year that her father ran a non-governmental organisation that helped people with land claims.

Madjozi, whose real name is Maya Xichavo Wegerif, made headlines when she won two awards at the 25th South African Music Awards (SAMA) earlier this month. She took home the Female Artist of the Year award as well as the Newcomer of the Year with her Limpopo Champions League album - her debut album – which was released towards the end of last year, following a string of hit singles including Huku, DumiHi Phone and Kona, among others.

According to media reports, Sho Madjozi travelled the continent as a young girl because of her father’s work. The young Madjozi followed her father to Tanzania where he worked for Oxfam. The Mail & Guardian reports that they spent some time in Senegal as well, which gave her love and understanding for the continent that shapes her outlook.

She first launched her career as Maya the Poet. She studied creative writing and African studies on a scholarship at Mount Holyoke College in Massachusetts in the United States.

Madjozi rose to fame after her collaboration with rapper Okmalumkoolkat with the track Ngiyashisa Bhe. She is also an actor who first appeared on the Mzansi Magic telenovela Isithembiso in April 2017 while playing the role of Tsakane Mboweni – a character passionately involved in student politics.

Last June, Trace Africa partnered with the singer to make her ambassador for their mobile provider TRACE Mobile. In the same year the Limpopo-born musician graced the Global Citizen Festival: Mandela 100, in December at the FNB stadium that was headlined by Beyoncé and Jay Z.

Minister of Finance Tito Mboweni, who is also from Limpopo Province, took to Twitter to celebrate Sho Madjozi after the SAMA awards. “I drove two hours to have a traditional lunch at her home at Shirley village. Elim area. Limpopo. Last weekend she won SAMA awards. Great young musician,” he wrote, along with his selfie picture with the musician.

While delivering his state of the municipality address, the acting mayor of Makhado Municipality, Cllr Samuel Munyai, congratulated the music star. “This girl, through her music, has become an indomitable creative genius and beacon of creative excellence,” he said. 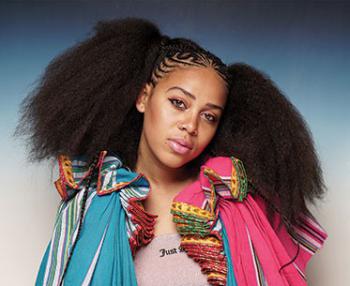 Sho Madjozi has been nominated for a BET award. Photo supplied.

Sho Madjozi from Shirley village outside Elim is making her name in the music industry. Photo supplied.