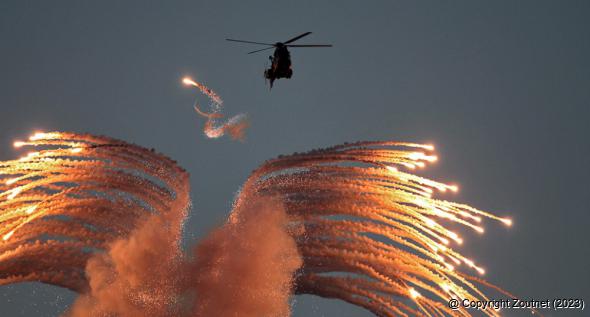 The South African Air Force (SAAF) on 31 May held its annual Air Capability Demonstration at the Roodewal weapons range in Limpopo, which for the first time featured the Super Lynx helicopter and armoured vehicles.

The event started off in the afternoon with pathfinders being parachuted into the battle zone. This was followed by two Hawks dropping bombs onto the range, and later firing their 30 mm cannons. A bomb damage assessment was flown by a Gripen - Gripens and Hawks later engaged in a mock dogfight. A total of six Gripens and four Hawks took part in the demonstration. Also on the sharp end, a single Rooivalk attack helicopter painted in white United Nations colours provided close air support with its 70 mm rockets and 20 mm cannon.