Last year, the Vhembe Biosphere (VBR) launched a Baobab Blitz Project to try and determine how baobab flowers are getting pollinated.

The project stretched from November until December and was done with the help of the VBR in association with the University of Venda (Univen), the National Research Foundation (NRF), Texas Tech University and the EcoProducts Foundation (Louis Trichardt).

Macy Madden, who headed the research project as part of her studies for the Texas Tech University, became interested in the subject when her South African collaborators said that they had never seen a bat visit a baobab tree. The theory was that, instead of bats, the true pollinators of the baobab are the hawk moths or a combination of the moths and bats together.

The project was therefore launched in the form of a citizen-science project to get local residents to observe, for two nights in November, all the different visitors to baobab trees across the northern part of the Limpopo and southern Zimbabwe. Due to stormy weather on the two nights scheduled for the project, more observations were done up until December.

The results were quite interesting. “Our visitors to the trees ranged from hawk moths and bats to Bush Babies, birds and all sorts of other insects,” said Macy.

Despite the many moth visitors, not all the moths were seen visiting the flowers. Macy found fewer moth visitors during November than in December after the early rains. “After the rain, I observed 20 hawk moths in one tree in a half hour and even more visits to flowers,” said Macy.

According to Macy’s data, the other visitors rivalled the moths in their flower visitations bringing into question the effectiveness of the hawk moth as pollinator. “Most of these other visitors were often the Christmas or rose beetles and sometimes bush babies,” said Macy.

Bush babies were observed moving from tree to tree, unlike the majority of the beetles who appeared to remain on the same flower. “The beetles seemed more interested in the anthers and pollen of a single flower instead of moving about the tree, let alone to another tree,” Macy explained.

Some fruit bats were also observed. These occurred at Goro Research Camp (Waterpoort), Mogalakwena Research Centre (close to the Botswana border) and the Pafuri River Camp. “These are particularly exciting and demonstrate that bats are in the areas and are at least visiting the trees, if not the flowers,” said Macy.

At the Chilo Gorge Lodge in Zimbabwe there was a reported incident of a fruit bat visiting flowers at baobabs just outside their roost. “To our knowledge, this is the southernmost observation of a fruit bat visiting a baobab flower,” said Macy. She is hopeful that she will be able to follow up the Baobab Blitz again later in the year in order to have data to compare across two years and get more conclusive answers. 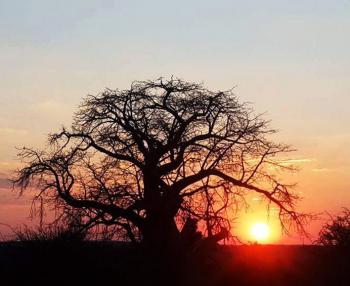 A baobab tree photographed during sunset by one of the participants of the Baobab Blitz project. Photo: Baobab Blitz Facebook.

A hawk moth photographed near a baobab tree by Macy during the time she spent in Venda last year while observing baobab pollinators.

Isabel joined the Zoutpansberger and Limpopo Mirror in 2009 as a reporter. She holds a BA Degree in Communication Sciences from the University of South Africa. Her beat is mainly crime and court reporting.