Violence erupted in Tshikuwi village in Nzhelele over the weekend after a murder accused, allegedly known to be terrorising the community, was arrested by the police.

The violence escalated quickly on Sunday morning as residents claimed the police were hiding the suspect from the community “which needed to teach him a lesson”.

Fed-up residents quickly barricaded the R525 road from the N1 at Wylliespoort to Tshikuwi village with burning tyres and rocks. The chaos lasted for at least four days, despite the suspect’s appearing in the Dzanani Magistrate’s Court on Tuesday morning.

One of the residents, who did not want to be named, said the suspect had allegedly been caught while trying to assault a woman in the area. The suspect, Tshivhilaeli Rangolo (23), allegedly attacked the man who was trying to rescue the victim and left him for dead.

“The police have since arrested him and the community feels that the authorities are protecting the criminal as they wanted to deal with him,” he said.

On Wednesday morning, the road was still closed with stones and tree branches.

The councillor for Ward 21 in the Makhado Local Municipality, Mr Mbulaheni Magada, said that although the road was still closed on Wednesday morning, they had called a meeting with the parents in the afternoon.

Provincial police spokesperson Col Moatshe Ngoepe confirmed that Rangolo had appeared in court and been remanded in custody. He will appear in court again on 28 March for a bail application, but the police continue with investigations. “We have opened a murder case, and the investigations are still continuing. The situation is now normal, but we are still monitoring it,” he said.

He said members of the community were demanding that the suspect be released. “There is a community protest where they are demanding the suspect to be released, so that they can unleash their anger on him. The roads leading to Tshikuwi village are blocked with stones, and the Public Order Police Unit is still dealing with it,” he said.

At the time of our going to press the roads to the area were still closed, with reports of the strike expected to continue. 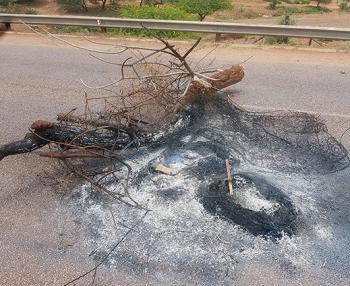 Residents burned tyres and trees on the R525 passing through Tshikuwi Village.