Are police losing the fight against crime?

On Friday afternoon, the Thohoyandou CBD resembled the set of a Hollywood action movie, with gunfire being exchanged between armed robbers and the police, forcing bystanders to duck for cover or run for their lives - not once, but on two occasions.

The second incident took place almost at the same time at Mutsindo Mall, when daring armed robbers shot their way towards a cash shipment that was being delivered to one of the businesses at the mall. The robbers allegedly waited for a cash-delivery vehicle at the centre, which they then ambushed. Three people, including a security guard, are believed to have been shot in the fracas.

Exactly how much was stolen during the robbery is unknown.

In the first incident, at the Boxer Store, a 27-year-old alleged armed robbery was shot and fatally wounded while his 25-year-old accomplice was arrested during a confrontation with members of the South African Police Service's Task Team in Thohoyandou.

The two incidents came amidst a string of robberies and killings in the Thohoyandou area where guns were used.

Witnesses who could not be named said they had heard the sound of gunfire coming from an open space behind Mafhali Hair Salon, next to the Boxer Store. “We rushed there to find that a man was lying dead just next to the door of the salon.”

Within a short space of time a big crowd had gathered at the scene. “There were many police there and some men nearby were lying with their faces down. We suspected that they were part of the gang that was being hunted by the police. Just near them was a Nissan Hardbody van which was suspected to be the getaway vehicle for the robbers,” the bystander said.

The source said the scene was very scary, with the body of the suspect lying in a pool of blood.

“Thohoyandou is no longer safe. We have had enough of killings and robberies and the police have not made breakthroughs in most cases. This shows that criminals are having the upper hand and police are losing the fight,” said a resident of the town.

Limpopo police spokesperson Col Moatshe Ngoepe said they had been gathering information about armed groups of criminals believed to be behind the spate of business robberies at local shopping centres. He said they had received information from the community about the groups' presence in town and reacted swiftly.

“On arrival at the shopping centre, the suspects started shooting at the police, who retaliated. Subsequently, one suspect was fatally wounded and his accomplice was apprehended. Two other suspects managed to evade arrest and fled the scene. A white Nissan Hardbody vehicle was recovered during this incident,” Ngoepe said.

He added that the identity of the deceased, the origin of the recovered motor vehicle and the possible linkage of the arrested suspect and the deceased to other criminal activities in the area would still be determined by the ongoing police investigations. He said that a manhunt had ensued for the remaining two suspects.

Meanwhile, Limpopo police commissioner General Nneke Ledwaba has warned criminals to stop terrorising communities as by doing so they will meet the full might of the law. He also called on the community to work hand in hand with the police in fighting crime.

Those with information that could lead to the arrest of suspects are requested to contact Major General Rosina Mulaudzi at 082 451 7217. 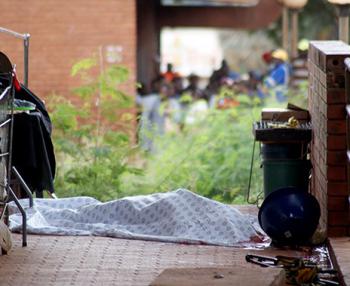 The alleged thug lies dead next to a hair salon in Thohoyandou after he was shot by the police.

The cash van that was robbed at the Mutsindo Mall on Friday.