New VDM mayor says they are cleaning up corruption

The executive mayor of the Vhembe District Municipality (VDM), Cllr Mavhungu Lerule-Ramakhanya, said that the two portfolio heads who had recently been replaced had had no links to the beleaguered VBS Mutual Bank.

She recently addressed a media briefing during her 100 days in the office.

"There are investigators and law enforcement agencies who are still investigating the case and whoever is found on the wrong side of the law will be dealt with accordingly. We are cleaning up corruption, and we hope that the recruitment process for the positions of municipal manager and chief financial officer will be finalised very soon," said Lerule-Ramakhanya.

"We are on an ambitions drive to industrialize, to attract investments and to create more jobs for our people, and we are proud that the Makhado-Musina Special Economic Zones (SEZ) will create more than 20 000 jobs,” she said.

According to her, the district is also excited that some of the major water projects have been completed. She said that the Mulima, Likhade, Lambani and Pfanani water supply as well as the Budeli, Mutoti and Dumasi scheme would be handed over before the end of May. 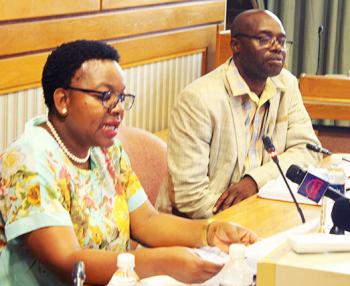 The executive mayor of Vhembe, Cllr Mavhungu Lerule-Ramakhanya, adresses the media on her 100 days in office while the municipal spokersperson, Mr Matodzi Ralushai, looks on.