First-year students at the University of Venda (Univen) will receive tablet computers, pre-loaded with their prescribed textbooks, at no extra cost.

The bold move of the university to “digitize its higher education” was announced on Tuesday. The first tablets were officially handed over during a function at Univen on Wednesday.

“Over 2 000 students who will start their studies at Univen this year will receive the new 10.5” touchscreen Note tablets, loaded with the prescribed course material,” said Univen in a press release.

Univen’s vice-chancellor, Dr NB Nthambeleni, said that preparing students for the challenges outside, especially as far as technology was concerned, was essential. “We want to make our students’ learning experience as close as possible to the world of work they will be entering, and we’re very pleased to partner with MAB Technologies, one of the world’s leading technology companies, to do that.”

He said that more students were reading digital books was clear, and that a majority (63%) of Univen students believed that tablets would effectively replace textbooks within the next five years. “This intervention is in support of the South African National Development Plan’s vision 2030, which emphasizes a need to bridge the digital divide by ensuring that everyone in the country has affordable access to ICTs, particularly at our former historically disadvantaged universities,” he said.

Univen students will access their textbooks through advanced e-text software, allowing them to read their textbooks on-screen. Course lecturers will be able to make notes and update texts throughout the academic year. These will automatically update to the students’ tablet devices. 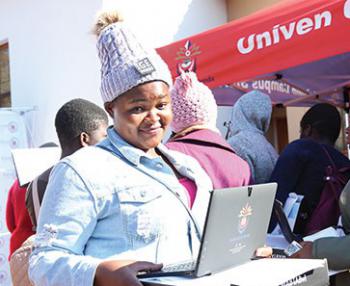 One of the students smiling after receiving a new tablet. (Photo Mbulaheni Ridovhona