Baloyi (77) says he is still excited about the honour in recognition of the commitment he has put into developing boxers from his home village of Malamulele over the past 45 years. He is a former police officer who worked in different parts of the country, including Cape Town, Bloemfontein, Sekhukhune and the former Gazankulu Government when it started in 1969.

He has turned several young boys into national and international boxers in his makeshift gym, based at his home. Some of the more famous boxers he trained include his son, Cassius Baloyi, and Isaac Hlatswayo.

The Order of Ikhamanga is an award that is given by a sitting President of the country to a South African citizen who has excelled in the fields of arts, culture, literature, music, journalism and sport.

“I am very that happy that my hard work has been honoured by President Ramaphosa while I am still alive.  I am humbled.  This will inspire me to do more and better as I am still training young boxers,” says Baloyi.

After many years of hardship, where he trained boys under trees using makeshift punching bags, Baloyi says he is happy that he now has a well-equipped gym that was provided by the Department of Sports, Arts and Culture.

The gymnasium, Malamulele Boxing Gym, which was constructed at more than R18 million, was handed to Baloyi in 2009 after completion.

Besides his advanced age, Baloyi says he is going to work hard to make sure that he produces more future boxing champions. He also encourages other community members to help in producing future stars in different sporting categories and other fields, so that they can have a better future. 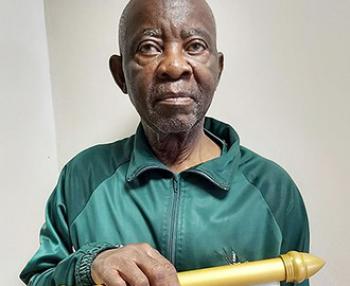