All charges withdrawn against Venter

The three men arrested along the N1 just outside of Louis Trichardt last week on charges relating to stock theft appeared in the Louis Trichardt Magistrate’s Court again on Wednesday.

During their court appearance, all charges were withdrawn against accused number three, the 38-year-old Mr Theunis Johannes Venter. This follows after it had come to light that Venter was merely the driver of the truck rented by co-accused Selelo Maoto (accused number one) and Azwindini Nethononda (accused number two).

All three men were in the truck when the police stopped them. During the search, the police found 10 cattle in the back of the truck, with none of the men able to give a satisfactory explanation about ownership of the cattle, worth about R100 000.

Venter, who was kept in police custody since his arrest on 30 July, was released after his court appearance on Wednesday. The 40-year-old Maoto was released on R2 000 bail, while the State opposed the granting of bail to Nethononda, since he has a similar case of alleged stock theft pending against him in the Musina court.

The case against Maoto and Nethononda was postponed until next Tuesday, when Nethononda will bring a formal bail application. 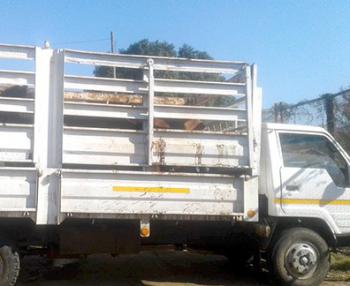 The truck on which police found 10 cattle worth about R100 000 just outside Louis Trichardt last week. Photo: Limpopo SAPS.