Tsepang Gilbert Phaswana was crowned Mr Univen and Mukondeleli Anemone Mathabi as Miss Univen during a recent ceremony held in the Univen auditorium.

An overwhelmed Phaswana said that he was very happy with the title as the competition had been tight. "I had to put extra effort and remain focused; that is how I managed to win this title."

Phaswana, a first-year BA (International Relations) student, said that he wanted to make a positive impact in society. "Soon I will start donating food parcels and uniforms to disadvantaged learners," Phaswana said.

Mathabi said being crowned Miss Univen was an amazing feeling. “I feel so honoured to be the reigning queen of one of the biggest institutions of higher learning. I thank the almighty God for everything," Mathabi said.

Mathabi, a first-year B Ed (Further Education and Training) student, said that she started modelling in 2017 when she was in Grade 12. “I first developed the love for modelling when I was still young, but I was too scared and had less confidence. I got my first victory this year as Miss Nzhelele Valley, which was one of the biggest achievements that motivated me to keep going," Mathabi said.

She further said that she wanted to influence other young people that they should always bear in mind that they can still rise and achieve any goal despite their fears. “I want to see myself as Miss South Africa and I am confident that I will fulfil this dream.”

The purpose of the pageant is to find suitable candidates who will represent the institution in a manner that meets the interests of the students. It also aims to encourage young people to be confident and prove their leadership skills by representing the students and management as the face of the institution, and to create future leaders who care about the interests of others and not just their own. 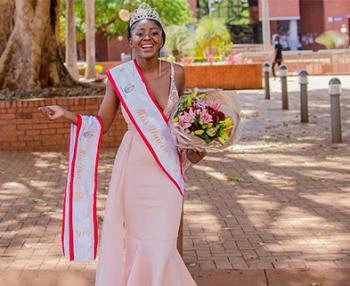