“There is no need to budget for drilling more boreholes in our area,” said Gilbert Muofhe from the Kutama Traditional Council. He said the municipality should rather spend the money on repairing and maintaining the existing infrastructure.

Muofhe made this statement after the water supply to the Tshikwarani community was interrupted yet again. The community had to battle without water for four months. On Friday, 27 September 2019, water started flowing through the taps again, but it was only pumped that Friday. The following week, the community once again had no water, up to Friday, 4 October when the water was available again, but only on that Friday.

Matodzi Ralushai, Vhembe District Municipality’s communication officer, said that the municipality was aware of the water challenges in Tshikwarani. “The community should work together with the police to identify those who vandalise water structures. This will go a long way in solving water challenges in the area,” said Ralushai.

Muofhe showed Limpopo Mirror the minutes of a meeting between the community and the municipality that was held on 13 March 2019. The minutes refer to a budget expense of R1,75 million for the testing of water and electrification of another borehole drilled in the Zamenkomste area at Kutama.

“That money should be allocated for maintenance. The water in our area has been tested and we are happy with the tests. There is no need for testing or coming up with other water projects,” said Muofhe, adding that water and sanitation issues should be run by the Makhado Municipality as the Vhembe District was too big to be run by one municipality.

Ralushai, however, responded by saying that once the Kutama-Sinthumule bulk water supply project was completed, a constant water supply to the area would be in place. The project is due to be completed by December next year.

Ezekiel Mugwili from Zamenkomste village said, “We are not getting any services from the municipality. There are some elderly people living alone and they have no option but to push three 25-litre containers in a wheelbarrow for about a kilometre. This is unbearable”.

According to Mugwili, residents in his area have to buy water from those who own boreholes. Twenty-five litres of water cost around R3.

Limpopo Mirror visited family members who were mourning a loved one who had died on 29 September and was laid to rest on 5 October. “For the whole week we had to buy water. We needed water for cooking, drinking and tidying up the place. We used four to five 100-litre containers every day. This is a huge expense for us,” said the family representative, who did not want her name to be published.

The bereaved family had to hire a bakkie to fetch water for use at the funeral.  Each trip cost them R200 and each drum cost R35.

Solly Lifuwa from Midoroni village says most people in his community cannot afford hiring a bakkie. They go for donkey carts that are cheaper. Such a trip costs R50. 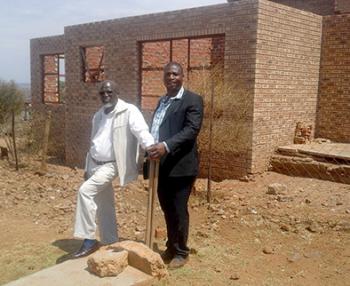