Residents of the areas around Vuwani and Vhembe are still shocked after the death of six people, a father and mother and their four children, who were killed in a horrifying accident on the N1 north near Hammanskraal on Sunday.

The Ramulifho family members were on their way to Gauteng from Tshimbupfe-Malonga, when their sedan collided head-on with an oncoming truck. The family were residents of Tshimbupfe-Malonga in the Vuwani area, and all died instantly.

Traffic came to a halt while rescue workers tried to retrieve the mangled wreck. Traffic police had to battle to clear the road of curious onlookers who blocked the road in a bid to have a glimpse of the scene.

A family representative, Mr Samuel Ramulifho, said that the family had accepted the loss, although it was difficult to cope with. "We understand and accept that our beloved children are gone, but it will be very difficult for us to live without them. It is also important to acknowledge the community´s support since we were greeted with the bad news. God has done his will," he said.

He also thanked the traditional leaders and government members who visited the family for their support during this difficult time.

Chief Livhuwani Matsila, who pledged assistance with the funeral, visited the family on Tuesday and expressed his condolences to the family of the victims and said they would be sorely missed. He added that the community members around the Vuwani area were deeply touched with the horror of the accident.

"The family members of the victims need our support in hard times like these, and we hope accidents of this nature, which can be prevented, will never again take place on our roads," he said.

Matsila said although the family, friends and community accepted what had happened, it would be difficult to forget the horrific deaths that had robbed the community of energetic residents.

The executive mayor of the Vhembe Municipality, Cllr Dowelani Nenguda, expressed his condolences to the family and said that their loved ones would always be remembered. He said that the family members were totally devastated by the horrific accident. “Understandably, it is very difficult to continue with everyday life after such a traumatic experience and the family needs support,” he said.

Nenguda has urged members of the bereaved families and all stakeholders involved in the preparations for the funerals to be united and work together with their municipalities to ensure that they received a dignified burial. 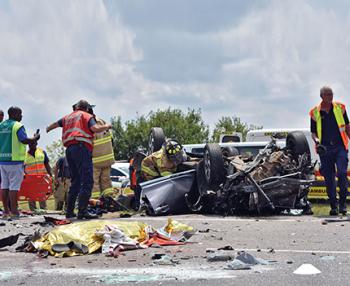 The mangled wreckage of the vehicle in which the Ramulifho family died. Photo supplied.