Mourners from around the province and further afield attended the mass funeral of the six Ramulifho family members who died in an accident on Sunday, 12 January.

The family was buried during an emotional funeral held at Tshimbupfe in the Vuwani area on Saturday. The emergency personnel and nurses from Vhembe District worked overtime when many people collapsed during the funeral.

The Ramulifho family members were on their way to Gauteng from Tshimbupfe-Malonga, when their sedan collided head-on with an oncoming truck near Hammanskraal. The deceased are Mr Takalani Booi Ramulifho (53) and his wife, Elsie (47), daughter Precious (19) and three sons, Vincent (16), Trevor (14) and Rofhiwa Emmanuel (6).

Thovhele Vho-Nndweleni Mashamba expressed his condolences to the family of the victims and said they would be sorely missed. Mashamba said the community members around the Vhembe and Limpopo area were deeply touched by the horror of the accident, especially as the victims were one family. “The family members of the victims need our support in hard times like these, and we hope accidents of this nature, which can be prevented, will never again take place on our roads,” he said.

Chief Livhuwani Matsila said they had come there to bury soldiers. “We sadly accept their deaths, but we console ourselves by the achievements they accomplished in their short lives. We do not dwell on the years lived, but we invest in the quality of life lived, no matter how short it was. We do not have proper words to explain how they will be missed. May their souls rest in peace,” he said.

A family representative, Mr Samuel Ramulifho, told mourners that the families had accepted the loss although it was difficult to cope with it. “We understand and accept that our beloved children are gone, but it will be very difficult for us to live without them. However, it is also important to acknowledge the community, government and traditional leaders’ support since we were greeted with the bad news. God has done his will and there is nothing we can do because the situation is irreversible,” he said.

Vhembe’s executive mayor, Cllr Dowelani Nenguda, expressed his condolences to the families and said that their loved ones would always be remembered. “Our thoughts and prayers are with the families of the deceased during this time of grief,” he said. 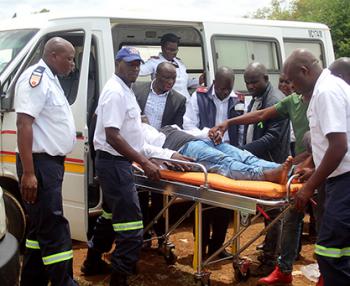 Emergency personnel attended mourners who collapsed at the funeral.