Mr Peter Rabali (73), a well-known businessman, a former chairperson of Dynamos FC, and an archbishop of the New African Apostolic Church, was laid to rest at Ha- Rabali on Sunday.

Rabali died at the Mulbarton Hospital in Johannesburg last Thursday after a short illness. He also has interests in the transport industry.

In 1994, he ventured into football and bought the franchise of D’Alberton Callies. He relocated the club to Thohoyandou and renamed it Rabali Blackpool FC, participating in the National Soccer League. Blackpool, which was famously called Matari Aya Fhambana, translated as “leaves are different”, was relegated to the lower division in 1995.

Four years later, Rabali was part of group of businessmen in the Vhembe District who managed Dynamos FC, which was promoted to the Premier Soccer League.

Rabali’s stint in football was, however, brief. He was later banned from football for life due to alleged corruption related to match fixing.

All speakers who shared the podium during the funeral ceremony described Rabali as a pioneer, a born leader, and a man of vision. Family spokesperson Mr Takalani Rabali said that the late Rabali had been the archbishop and a respected figure in his community at the time of his passing. He said the family had suffered a great loss with the death of their father.

“It is painful to lose an intelligent father, but we thank God because He does everything for a reason. Rabali was a leader in different organisations, so he was a people’s person and was not only involved in football.”

Mr Mulimisi Muneri worked closely with Rabali as the team manager of Dynamos FC. He says Rabali had made an enormous contribution to football. “He was one man who was down to earth; he could interact with almost everybody.”

A friend and the chairperson of Black Leopards, Mr David Thidiela, said that Rabali had been a “soldier” for the bigger part of his adult life. “He was one of those men who fought for development in the prime of his life and excelled at everything he did. He will be remembered for his dedication and commitment to the business and the church.” Thidiela said the contributions of Rabali would remain to be seen as he was a patriot who justified the cause of the struggle for the emancipation of mankind from all forms of slavery.

Mr Robert Livhoyi from NAFCOC paid a glowing tribute to Rabali, saying he was a tower over the rest regarding issues of community development. He was also described as a workaholic “who made father earth his friend as a business industry”. Livhoyi urged others to emulate him and to follow in his footsteps and to continue where he left off in assisting the community. 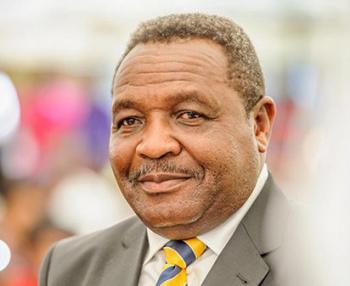