Gogo Vho-Nyatshavhungwa Mudzanani-Nangammbi from Duvhuledza village near Mubumoni outside Thohoyandou was joined by her children, relatives, and local residents to celebrate her 100th birthday on 1 January.

The function was held in Duvhuledza–Nangammbini and great care was taken by all guests to adhere to the Covid-19 protocols, while they shared this special day with her.

Gogo Mudzanani-Nangammbi was born and bred in the rural village of Shakadza in the Mutale area, but was married in Duvhuledza. She said that, although she now walked with the aid of her walking stick, she was still strong and hoped to celebrate many more birthdays to come.

She thanked everyone, including her children, who had helped to organise a party for her. “I can still speak well, eat and am able to see. I enjoy eating mashonzha (mopani worms), vegetables (miroho) and fruits. I thank God that I’m still alive at this ripe age, because many of the people of my age are no longer alive. I’m celebrating this day because of the will of God. Someone who celebrates 100 years nowadays is considered being a lucky person, especially as the country is attacked by the coronavirus and HIV/Aids,” Mudzanani-Nangammbi said.

In taking care of herself, Gogo Mudzanani-Nangammbi said she did not eat food cooked in fat or drink alcohol. She remembered the old days in her rural village of Shakadza, when they had to walk from one village to another as no public transport was available like today. They also had to go to the fields to plough. In those days, they still had to use the old methods of grinding mealies, but she said that life was good back then.

According to her youngest son, Mpfunzeni Nangammbi, they were raised under difficult conditions but were taught good morals and always encouraged to take education seriously. Mpfunzeni, who is now the principal of Khubvi Primary School, said that, although he had been born into a poor family, his mother had been very strict as far as schoolwork was concerned and had always made sure that the paraffin lamp was filled.

“She used to brew traditional beer called mahafhe, and with the little money she made, paid our school fees. When I started sub-A, neither my father nor my mother worked, and we were dependant on subsistence farming. When I went to college, the main source of funds were old-age grants. I was lucky that my college fees could be paid, although it was very cheap in those days. All that was required at college was hard work and determination in schoolwork. We are very thankful for my mother’s devotion and love,” Mpfunzeni said. 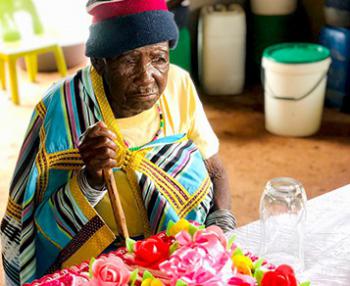