Roadblocks and patrols along borderline to stop illegal entries

A total of 179 undocumented foreign nationals were arrested and deported back to Zimbabwe during a roadblock held in the first week of January this year on the N1 road in Musina. This was made public by the Minister of Home Affairs, Dr Aaron Motsoaledi, during his oversight visit to monitor the borderline between South Africa and Zimbabwe.

Motsoaledi, accompanied by the mayor of Musina, Cllr Nkhanedzeni Godfrey Mawela, members of the South African National Defence Force (SANDF), representatives from the National Border Management Coordinating Centre and the police, visited several spots along the borderline where border jumpers illegally cross the fence between the two countries.

“The influx of undocumented foreign nationals is a huge challenge [for] our country and we are doing our best to resolve it. We have also received disturbing reports that the SANDF returns back to Zimbabwe between 60 and 100 people every day who try to cross illegally to South Africa. That is why we are also conducting these roadblocks as firewalls to nab those who think they escaped detection at the borderline. We will continue to monitor the borderline and man roadblocks because it is helping us to nab those who are moving between these two countries illegally,” said Motsoaledi.

He added that the law enforcement agencies would show no mercy to either drivers or passengers who promoted the illegal movement of undocumented foreign nationals between the two countries. “We have noted that some undocumented people travel by car from Zimbabwe and (get) dropped off around the borderline. The drivers of these cars have all the documents and cross the border legally in order to collect their undocumented passengers on the other side of the borderline. That is why we will continue to work with law enforcement agencies to stop these organised syndicates.”

Mayor Mawela thanked the minister and various stakeholders for taking the time to be a part of the borderline monitoring campaign. “As the municipality [that lies] closest to the border, this type of campaign helps us to reduce the number of undocumented foreign nationals in our area. We encourage our brothers and sisters from other countries to acquire legal documents, so that they can travel freely to their various destinations in our country.” 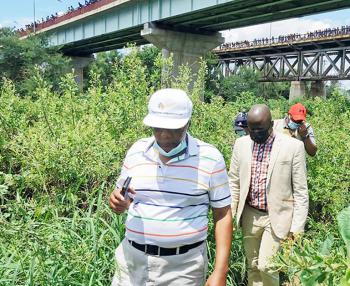