A Limpopo-based woman, Ms Lindelani Sharon Livhebe, has started a cultural dance project, called Khari tshine Ma Africa Dance, meaning “let’s dance the African dances” in English. She is urging all South Africans to come and perform their dances in an effort to exhibit these cultural dances while also sharing vital educational lessons.

Livhebe (36) was born and raised in the Ravele royal family in Sibasa, where she embraced the Vhavenda culture and learnt how to be responsible at a very early age.

She said that, in 2018, she came up with the idea of starting a film and production company, called Village Rose. Her husband, Mr Hulisani Livhebe, who is also an experienced documentary filmmaker, assisted her in this endeavour and guided her into the amazing world of storytelling through the lens of a camera.

According to Livhebe, her latest project entails promoting cultural dances such as tshigombela, malende, xibelane, tshikona and tshifasi. “We have to teach our young kids to take part in different cultural dances and preserve the culture, so that future generations will also know how things were done in the past,” she said.

Livhebe said that the dance project went from strength to strength, and they were commissioned by SABC2 television to record a 13-episode documentary series. The series started airing on SABC2 on 5 October this year and is aired every Tuesday night at 20:30.

“The series is aimed at challenging and questioning contemporary lifestyles by contrasting them with those of our forebears,” she said. She mentions an example of the fight against HIV/Aids that has ravaged society. This is put in contrast with illnesses from the past that our ancestors had to battle.

“Our intention with Khari tshine Ma Africa Dance is to take the viewer not only on a journey to explore the positive evolution and development of these cultural dances, but that of tolerance and dispelling the myth of entitlement,” she said. She mentions the example of a girl wearing a shedo (the traditional attire that only covers the private area) of girls performing the Domba dance. 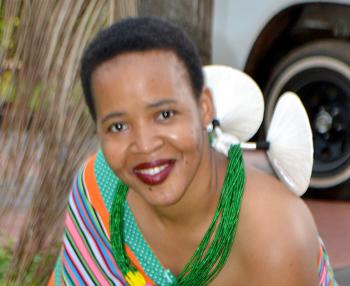