'Our graveyards should be sacred places - not a dumping ground'

Limpopo Mirror correspondent Bernard Chiguvare visited the cemetery in Nancefield earlier this month. He was invited to go there to witness the shocking state of the graveyard. Here is his own account of what he found:

It was around 09:00 on Saturday morning, 7 May, but a thick cloud of smoke already billowed out of what seemed to be a bushy area in Nancefield, Musina.

As I came closer to the smoking area, I noticed an old man, clad in black attire from head to toe. The old man was sweating from the heat of the fire. He was burning the grass and dead branches and other rubble found in the graveyard.

“Why are you burning the grass here?” I wanted to know.

“This is one of the oldest graveyards in Musina,” he said, looking over the site. “I believe the graveyard should be a respected place. It should be kept clean and tidy.”

His home stood a couple of metres from the graveyard. Asked why he had taken it upon himself to clean the graveyard, he said: “Twenty-seven years ago I buried my father at this graveyard. This is a sacred place.”

The man, Elvis Sithole (72), did not mince his words. He blamed the municipality and residents for the poor state of the graveyard.

Sithole was once a councillor of Musina Municipality, around 1994. He said the graveyard used to be cleaned regularly, with security guards manning it.  “I was born and bred here in Musina. There are a lot of issues going wrong in Musina, like the graveyard that is now not being looked after. People are turning it into a place for mischief. Sometimes I see people sleeping here at night.”

Other residents are also concerned about the state of the graveyard. The area has grown wild and bushy, and for trouble-seekers to gain entry into the graveyard is easy.

“There are all kinds of criminal activities going on at the graveyard. The municipality should take note of this,” said Peter Jack, chairperson of an organisation called Musina To The Front.

Jack said the community wanted the municipality to clean up and rebuild the collapsed wall, and suggested that they make use of EPWP workers.

Regarding criminal activities at the graveyard, the municipality said they took this in a serious light and promised to report it to the police, so that it could be rooted out.

On the issue of overgrown bushes, the municipality argued that a part of the graveyard was waterlogged, which meant that the vegetation would grow fast, even if the municipality cleaned the area regularly.

Responding to the issue of security guards, Dzebu said the municipality conducted a risk assessment before assigning security guards to any area. “None of our graveyards are guarded by security,” he said. 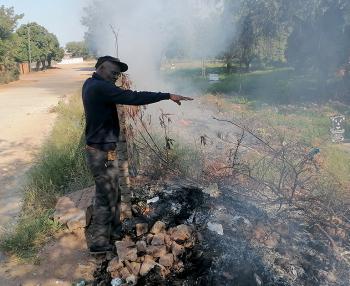