Tshimangadzo Tuwani, Romeo Mudau and Maria Ndou were the first three people to receive a free cow each from the Planting Cattle in Villages Programme (CVP) during a function held on Friday, 20 May, at Tshipise Tsha Sagole village.

Nwali Muhulu means “The Great God” in Tshivenda and is believed to be the resting place of Nwali (God) before he went to Makonde to deliver messages to his people many years ago.

According to Pastor Vhulahani, the foundation aims to eradicate poverty and hunger through sustainable, value-based holistic community development, while creating economic opportunities for the poor and underprivileged.

The CVP purchases a cow from a customary farmer in a specific village and donates it to an identified needy beneficiary. “When the cow gives birth, the calf is donated to another identified beneficiary in the next village. The same process goes on in a form of a chain. We aim to provide self-sufficient wealth creation and sustainable livelihood and to create a spider web kind of community development through donating cows, which we buy from our own pockets because we don’t have sponsors. The target group includes widowed women, orphans and people living with disabilities who receive the cows every year on 26 December.”

Vhulahani said the project operated in all 14 villages under Ward 10 in the Musina Municipality. “In each village, we have a local village committee that identifies and recommends beneficiaries to the foundation. The local village committee also makes sure that the whole family benefits, rather than just one person, and monitors the well-being of the cattle at the beginning of the handover until the owners are able to raise them on their own. It also has the responsibility to request the local community for an exchange if the first calf born is a male [bull]. We have set a target of at least 1 000 families to benefit from this project in 10 to 20 years.”

One of the beneficiaries, Tshimangadzo Tuwani from Zwigodini village, said the initiative would help him to improve his situation as he did not have parents. “With this start, I plan to have my own herd of cattle over the years, which will ultimately help me to accumulate wealth to support my family. Cattle are an integral part of our lives here in rural villages because they play an important role in our economic activities,” he said. 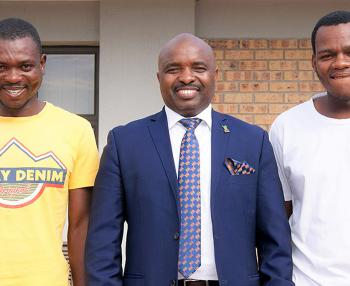 The founder of the Planting Cattle in Villages Programme, Pastor Humbulani Jonas Vhulahani (middle), captured with Tshimangadzo Tuwani (left) and  Romeo Mudau (right), the beneficiaries who each received a free cow.